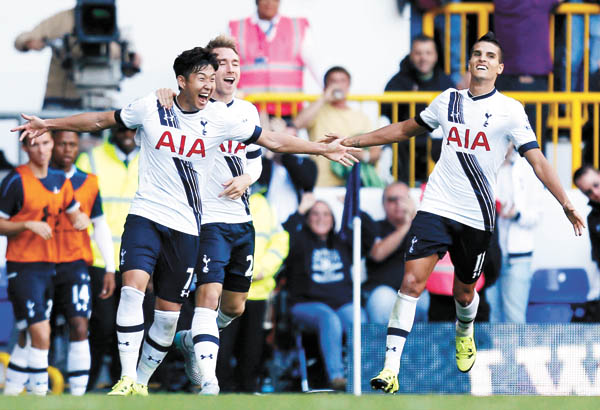 Tottenham Hotspur’s Son Heung-min, left, celebrates with Christian Eriksen and Erik Lamela, right, after scoring his side’s first goal of the game against Crystal Palace during their English Premier League match at White Hart Lane, London, on Sunday. It was Son’s first goal in the EPL. Tottenham won 1-0. [AP/NEWSIS]

LONDON - After dishing out Korean food to his new Tottenham teammates, Son Heung-min served up his first Premier League goal.

The South Korea forward capped a dynamic display against Crystal Palace on Sunday by completing a second-half counterattack to seal a 1-0 victory at White Hart Lane.

With shot-shy Harry Kane looking short of confidence and yet to find the net in the league, Son’s instant impact is taking the heat off last season’s top scorer.

After costing around $30 million to sign from Bayer Leverkusen in August, Son has now netted three goals in three days, having opened his account for Tottenham with a double in the Europa League last Thursday.

“I hope every week is like this,” Son said. “It’s amazing, really another style to the Bundesliga - [more] power and speed and I like this. I’m really happy here to play.”

After facing weeks of questions about Tottenham’s failure to sign a No. 9 in the summer transfer window, Mauricio Pochettino now hopes fans are seeing how versatile Son can be in attacking positions.

“His performance was fantastic, the energy he showed was amazing,” Pochettino said. “Son is a player we followed for a long time. He’s a player who can play No. 9, 10, 7, 11 - in all different positons up front.”

With Son in the side, Tottenham has won all three games and demonstrated the high-tempo, pressing qualities desired by Pochettino.

And, having been substituted in the 79th minute, Son returned to the field after the final whistle to thank each of his teammates as the new fan favorite was cheered by the home crowd.

“You can see he’s a very friendly boy,” Pochettino said. “After one week with the team, he brought very good Korean food to the training ground.”

The Argentinian manager helped himself to a big dish of it. In the future though, he will be satisfied if Son only delivers goals.

In Sunday’s London derby, Son’s strike came in the 68th minute after Tottenham rapidly broke down the left flank. Christian Eriksen fed the ball to Son, who burst through the Palace defense before striking through goalkeeper Alex McCarthy’s legs to secure Tottenham’s second win of the six-game-old league season.

It proved to be the winning goal, only possible because a minute earlier Tottenham goalkeeper Hugo Lloris tipped Bakary Sako’s shot onto the post.

“You can see he is happy in Tottenham, and you can see the influence he has in the game,” Lloris said of Son. “He always has a lot of movement, he has great skills. He will help the team make a step forward.”

Tottenham moved level on points with eighth-place Crystal Palace but is behind on goal difference. They are six points adrift of leader Manchester City.

“We’re mid-table and I told the players after the game, that’s not for me,” Palace manager Alan Pardew said. “I don’t want to be there. We’re better than that.”

Korean football fans were not only waiting for Son to score but also wanted to see two Koreans playing on the same pitch, as Crystal Palace’s Lee Chung-yong was waiting to play in the bench. Although Lee did not enter the game, Son and Lee hugged each other after the final whistle was blown.

Meanwhile in Germany, three Koreans featured on the pitch to lead their team’s first victory in the league.

FC Augsburg’s Koo Ja-cheol, Hong Jeong-ho and Ji Dong-won all played their German Bundesliga match against Hannover 96 at its WWK Arena on Sunday in their team’s 2-0 victory. Augsburg now has one win, one draw and three losses to sit 14th in the league standings.

It was the first time in German Bundesliga history that three Koreans featured at the same time on the ground. Midfielder Koo and center back Hong were starters of the match, while forward Ji came on the 69th minute replacing Tobis Werner.