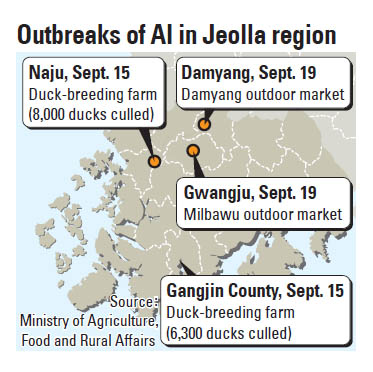 Two open-air markets in the Jeolla region contained the deadly avian influenza (AI) virus, the government confirmed on Monday, raising concerns in the country that the highly pathogenic bird flu could again sweep across the country ahead of the Chuseok holiday and the return of migratory birds to the country.

The Ministry of Agriculture, Food and Rural Affairs announced that two poultry stores, each from traditional outdoor markets in Damyang and Gwangju in South Jeolla, were affected with the H5N8 AI virus, after authorities tested the stores as part of a site inspection.

All of the 15 chickens and 16 ducks at the markets have been culled, according to the ministry.

The announcement came a day after authorities confirmed the highly deadly virus also struck two local duck-breeding farms in the province - one in Naju and the other from Gangjin County. Approximately 14,800 ducks were subsequently culled at the farms.

“We already classified some regions as ‘highly risky areas,’ and they are all in the Jeolla regions,” said Kim Yong-sang, an Agriculture Ministry official in charge of quarantine, at the briefing on Monday. “The riskiest area is Buan, North Jeolla.”

When asked if the infected ducks at the markets could have been brought from the affected duck-breeding farms in the same region, Kim refused to answer, saying, “We can’t tell you where the merchants at the markets bought their ducks, as the investigation is ongoing.”

After authorities took samples of duck stool and blood at the farms on Sept. 15, they announced a ban on the selling of any kind of poultry in the region until Monday. The ban will be lifted today, despite the outbreaks at the markets.

Concerns rose that the highly mobile virus could become an epidemic due to the four-day Chuseok holiday that starts Saturday. Government statistics show that more than 39 million Koreans moved between different cities during the holiday last year.

The return of migratory birds, expected to start from November in the southern region, is also worrisome, officials said, as birds carry and spread a flu virus through their stools.

“Basically, the virus can be carried by clothes, shoes or cars,” said Lee Yong-jin, another Agriculture Ministry official, by phone.

“But if migratory birds are infected with the AI virus, they can spread the virus in all regions in the country.

“We can’t block the coming migratory birds,” Lee said. “But we can at least take several quarantine measures, such as spraying disinfectant on shoes or cars visiting poultry farms.”

Korean authorities have claimed migratory birds were a major factor in bringing the virus from abroad.

The Food and Agriculture Organization (FAO) of the United Nations says on its website, however, that the role of migratory birds in spreading the virus is unclear, though infected migratory birds could be a source of infection for domestic poultry.

One possible factor in this most recent outbreak could be Korean merchants’ unique tradition of slaughtering chickens or ducks at the open markets, rather than in a separate shop, the authorities said.

“While most poultry is slaughtered at butchers’ shops, some small-size merchants slaughter ducks or chickens by themselves at outdoor markets in front of their customers,” said Kim, of the Agriculture Ministry.

“Those people do not have the proper hygienic equipment for butchery, and we are considering whether to curb those kinds of businesses.”

Korea suffered a historic outbreak of AI last year, during which nearly 15 million ducks and chickens were culled - the most-ever due to the virus in a single year.

Frequent outbreaks have been noted earlier this year.