Becoming friends on screen and off

Becoming friends on screen and off 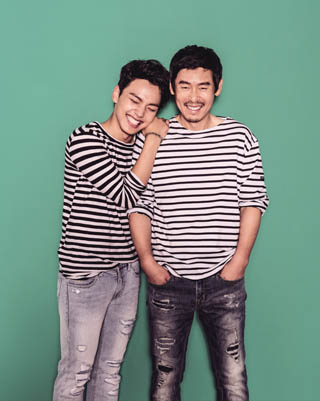 The time is the 1950-53 Korean War. In the upcoming film “The Long Way Home,” two soldiers from different sides of the Korean Peninsula accidentally encounter each other amid the deadly conflict and form an unlikely friendship. Forty-something Nam-bok from the southern side is conscripted to fight, leaving behind his farm. Yeong-gwang from the northern side is only 18 years old but assigned to drive a tank. Encompassing both drama and humor, this family-friendly film directed by Cheon Sung-il is slated to hit theaters this Thursday, in time for the Chuseok holiday (harvest festival). The Joong
Ang Ilbo, an affiliate of the Korea JoongAng Daily, recently met with the film’s two leading actors - Sul Kyung-gu and Yeo Jin-gu - for an interview.

On screen, Yeo is never an immature high schooler. The 18-year-old has always taken on adult-like characters with darker sides, in works like “Hwayi: A Monster Boy” (2013) and “Shoot Me in the Heart” (2014). But in “The Long Way Home,” Yeo seems to finally be acting his own age, playing the cheerful, innocent Yeong-gwang.

Q. Your character Yeong-gwang, a North Korean, seems to be one of the most naive characters you have taken on. How do you feel about it?

Yeo: That is true. Yeong-gwang is a wide-eyed boy who doesn’t know anything about the cruelty in the world. And he doesn’t even know how to face those cruelties. I have showed a lot of dark sides in my previous roles, but this character will cross the line between dark and light.

Unlike other war movies, this one depicts soldiers running for their lives from the battles. How do you feel about this?

Yeo: The film shows two very ordinary soldiers from different sides confronting each other on a grim battlefield. Of course, there were warriors who risked their lives in battles, but these guys just want to go home. It can be perceived as a more humane story.

Yeo: I was really worried at first. I had to bully him at first because he is my enemy, but that was really hard because he is many years my senior. But on the set, he broke the ice first by saying bad words as a joke.

You graduate high school next year. What do you want to do first when you grow up?

Yeo: Until now, I have always answered this question by saying that I want to get a driver’s license and travel somewhere. But to tell you the truth, my real No. 1 wish is to go on a date. I want to feel that fresh, ticklish feeling. I should have done something when I was in high school, but I couldn’t because it was an all-boys high school (laughs).

How did you pull off romantic performances then?

Yeo: It was really hard. Like many men, I am very blunt and unskilled at expressing my feelings. When I do romantic scenes, I try to get it done in the first take because I get so embarrassed. These days, fortunately, I can allow myself to feel attraction toward my on-screen partner.

The 47-year-old Sul is not a sweet guy at first glance. While posing for photos during the interview, the experienced actor didn’t stop grumbling, although not in a serious way, asking if he had done enough by now. But until the end, he finished all tasks asked of him. Sul resembles his character Nam-bok a lot in this way. While pretending to be a complainer on the outside, he really has a warm heart.

Q. Looking at your filmography, it seems like rough and tough roles that get beaten up suit you better than the noble, white-collar ones?

Sul: I feel like I have done something right if I suffer while filming. Compared to “Rikidozan: A Hero Extraordinary” (2004), where I had to speak Japanese while wrestling, this film wasn’t so tough. After all, it is a comedy-drama depicting the squabbles of Nam-bok and Yeong-gwang

Nam-bok and Yeong-gwang first confront each other as enemies. But it is Nam-bok who raises a white flag first and approaches Yeong-gwang. Why is that so?

Sul: Although they point guns at each other at first, seeing that Yeong-gwang is so young, Nam-bok must have felt that he is like a son to him rather than an enemy.

And in the end, you help Yeong-gwang survive as well.

Sul: For Nam-bok, trying to save himself as well as Yeong-gwang is not an act of heroism. It is like an instinct. What is the most valuable to him is getting by day-to-day without any trouble.

What was it like pairing up with Yeo Jin-gu?

Sul: Except for the fact that Jin-gu can’t drink, he was the one whom I clicked with the best out of all the staff and actors for this film. Jin-gu is very untainted and has a pure mind, but at the same time, he has strong aspirations for acting. I was at times envious of him because he started his career so early. I was just an ordinary high school boy at his age.