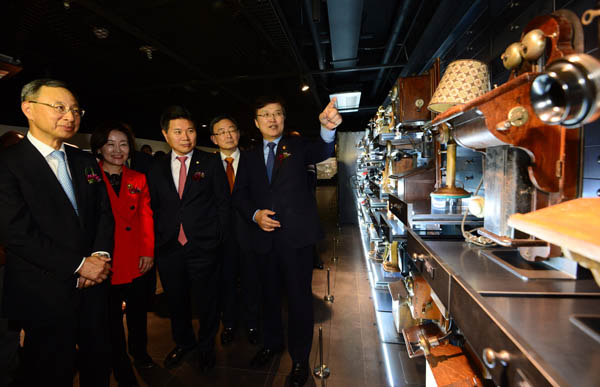 The ceremony, commemorating the history of KT, was held at the company’s headquarters in central Seoul and attracted political heavyweights including Minister of Science, ICT and Future Planning Choi Yang-hee and Choi Sung-joon, chairman of the Korea Communications Commission, as well as KT CEO Hwang Chang-gyu.

Established in 1885, the founding body of the telecom company was Hansung Telegraphy Ministry, then a state-run body. KT’s current name dates back to December 10, 1981, when the Korea Telecom Authority (KTA) was born as a spin-off from the Ministry of Information Communications (now the Korea Communications Commission).

The 2000s proved to be a lucrative decade for the group as the use of cell phones became widespread. In 2000, KT launched Asia’s largest Internet data center, Korea Telecom-Internet Data Center, or KT-IDC.

KT privatized fully in 2002 and started concentrating on building a broadband network. In just three short years, it had six million ADSL (Asymmetric Digital Subscriber Line, a form of DSL) subscribers. It also launched a high-speed wireless Internet service, Nespot, as well as the world’s first WiBro (Wireless Broadband) service for commercial use.

The CEO said that the telecom company will continue to lead the industry in the era of next-generation Internet connectivity 5G. “As the nation’s leading telecom company with a 130-year history, KT will take the lead in the development of 5G,” the CEO said during the ceremony.

The company plans to provide trial service first for the Pyeongchang 2018 Winter Olympics to be held in Korea.

Faced with saturated mobile and landline connectivity services, KT is looking for a fresh growth engine.

Most recently, KT announced it will venture into the web-based banking business in partnership with Woori Bank, Hyundai Securities, Hanwha Life and Posco ICT.

Along with the ceremony, there is an exhibition of photographs, old telephones and telecom devices on display on the first and second floors of Olleh Square in Gwanghwamun, central Seoul.