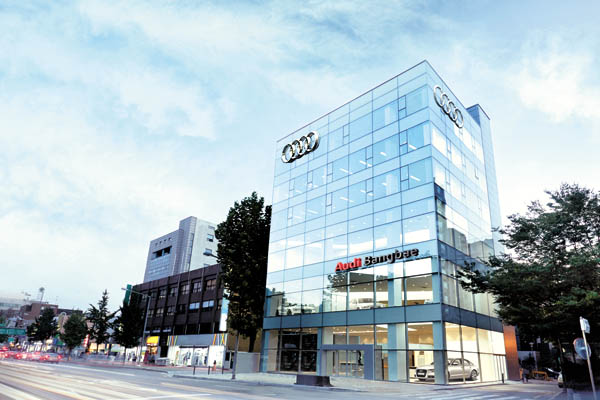 The service center of Audi that was opened in September in Bangbae-dong, southern Seoul. The company currently operates 26 service centers nationwide. Provided by the company

Banker Kim Hyuk-jin has dreamed of buying a new Audi A6 Sedan for some time.

But the 39-year-old recently gave up yearning for the luxury import because of his worries about after-sales service.

And his concerns were amplified by the recent “breaking Benz” incident where a customer, dissatisfied with what he felt was Mercedes-Benz Korea’s poor customer service, smashed up his 209 million won ($177,000) S63 AMG in Gwangju with a golf club.

That was enough for Kim to switch his buying decision to Hyundai Motor’s Genesis sedan.

“I know that foreign automakers like Audi, Mercedes-Benz and BMW produce better cars in terms of product quality than Korean brands, but one important issue for me is whether it is possible to spend a reasonable amount of money to keep my car rolling for a long time,” said Kim.

“I heard so many stories from my friends complaining about customer service on imports, one of whom said it took a month to repair a small defect.”

The quality of foreign brands’ after service has been an issue for decades. Many local consumers have been consistently complaining about a shortage of service centers, arguing that the automakers don’t even want to make a minimum amount of investment for customers while making big money on sales in the country.

Data collected by the Korea Consumer Agency (KCA) shows that a total of 562 complaints about foreign automakers’ poor customer service were reported in the past three years - 210 cases each in 2013 and last year and 142 cases through July this year.

Of the 210 in 2013, 171 cases were complaints about poor after service on product quality management. Last year 176 cases were reported for the same issues and 103 were reported through to July this year. Other issues were related with contracts made with local dealerships and expensive part prices.

The agency said there are a total of 359 service centers run by foreign automakers nationwide, adding that each center must manage at least 2,100 vehicles considering the number of foreign cars purchased in the past three years.

“Looking into those submitted complaints, most of the cases are complaining about similar things, the after service,” said a spokesman of KCA. “Since there are a limited number of service centers, consumers could wait for weeks to months to repair their cars.”

In order to resolve such problems, foreign automakers have announced plans to expand the number of service centers in the country.

Audi Korea announced in December that it will open 15 more service centers in the country, bringing its total to 40 centers by the end of the year. Through August however, only two centers were newly opened, including one in Bangbae-dong, southern Seoul.

“It may look like it is being delayed, but we can advise that 10 new service centers, all of which are brand new facilities, will be built around the country by the end of the year and four additional centers will begin construction works this year,” Han Dong-ryul, the spokesman of Marketing Communications of Audi Korea, told the Korea JoongAng Daily.

“Some of the 15 will not be completed as we promised to customers, but we are trying our best to improve our service quality.”

A total 127,259 Audi vehicles are registered as of August in the country, meaning that each center must be able to manage 4,895 cars. When asked about the exact progress rate on construction works, Audi Korea said the information is hard to provide since construction works are ongoing at many different places, but it believed that the work will be done on time.

Volkswagen Korea has promised it will open 11 more service centers this year, but only three have been opened, two in the first half and one in the second half.

“There must be so many customers who trusted those pledges made by foreign automakers who aggressively informed [consumers] about it through local media,” said Lee Jung-joo, head of Korea Consumer Association. “The government needs to provide policies that can force automakers, particularly German companies, to keep their word to protect consumers.”

According to KCA, a total of 196,359 imported vehicles were newly registered last year and 68 percent, or 133,753 units were Mercedes-Benz, Volkswagen, Audi, and BMW. The four companies currently are operating 140 service centers in the country.