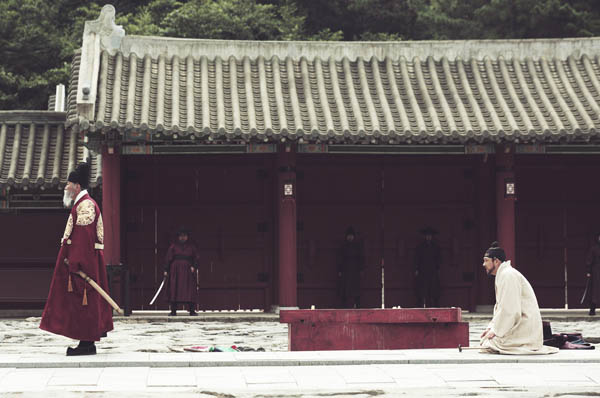 Lee Joon-ik’s latest period drama, “The Throne,” which retells the story of King Yeongjo, left, and his ill-fated son, Crown Prince Sado, topped the local box office during the third weekend of September. Provided by Showbox

Korean period drama “The Throne,” set in the Joseon Dynasty (1392-1910), took the box office by storm, debuting in first place with 1.3 million moviegoers and making 10.7 billion won ($9.1 million) over the weekend.

Accounting for more than 50 percent of box office sales from Friday to Sunday, the historical film directed by Lee Joon-ik retells story of King Yeongjo and his ill-fated son, Crown Prince Sado, who is put to death by being locked inside a wooden chest by his own father. Veteran actor Song Kang-ho plays the father while rising actor Yoo Ah-in took on the role of his son.

American young-adult film “Maze Runner: The Scorch Trials,” directed by Wes Ball, opened with 840,521 tickets sold to land in second place. It made 6.7 billion won over the weekend.

The dystopian sci-fi thriller based on the eponymous novel by James Dashner centers on a group of teenagers led by Thomas (Dylan O’Brien) who escaped from a maze created by an evil force called WCKD. The second installment picks up where the first left off, with Thomas and his group finding themselves in an even more dangerous situation.

The film stars Korean-American actor Lee Ki-hong, who plays Min-ho, one of the members of the group.

Marvel’s “Ant-Man” stepped down to third place, collecting 171,446 ticket admissions over the weekend, pulling its three-week total to 2.7 million ticket sales. It has so far made 22.4 billion won in Korean theaters.

It is likely that “Veteran” will set another record in the near future since the fifth most-watched film, “Miracle in Cell No. 7,” (2013) is ahead by less than 25,000 tickets admissions.