Festival invites Seoulites of all ages to street shows

Festival invites Seoulites of all ages to street shows 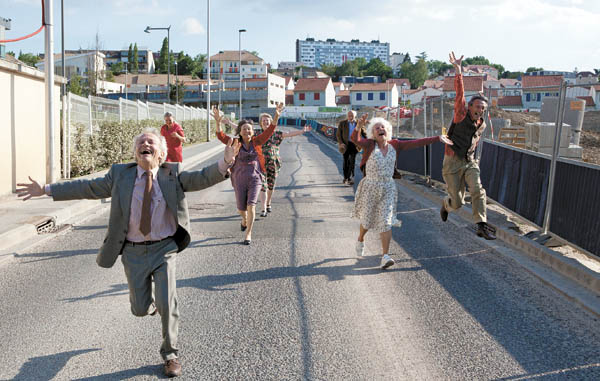 In keeping with the theme of this year’s Hi Seoul Festival, various street performance groups have been invited to put on shows. “The Great Escape,” a joint street performance by Korean actors and Compagnie Adhok from France. Provided by Vincent Muteau

Various spots in central Seoul will be transforming into performance venues next weekend for this year’s Hi Seoul Festival, and organizers are inviting all to come and “play in the street.”

The annual city-run festival started in 2003, but it was only in 2013 that the current artistic director, Kim Jong-seok, decided to transform it into a street art festival and make numerous efforts to establish it as the country’s representative outdoor festival where citizens can come together in the streets through art.

“Street festivals may be a somewhat unfamiliar type of festival, but they are widely enjoyed in other countries such as Europe,” said Kim, stressing the advantages of street festivals such as providing the general public an opportunity to experience performing arts and culture as well as developing future audiences who may be encouraged to come and see performances at theaters. 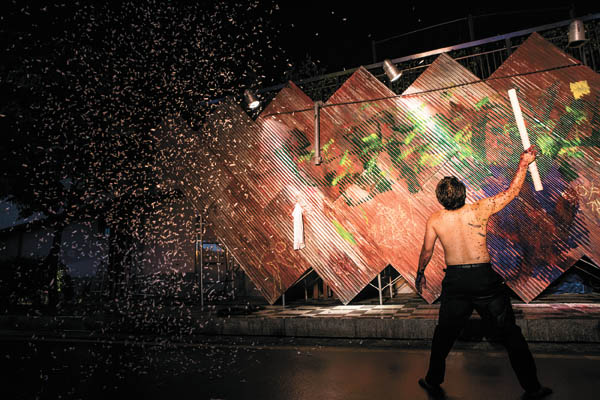 The “Falling as I Lean Against the Wall” painting performance.

Since Kim became the artistic director in 2013, he said he was concerned about the identity of the Hi Seoul Festival so he decided to make it a European-style street art festival, in which citizens actively participate in the festival.

“A street festival is where an ordinary space becomes a space of performance,” said Kim. “For us, Seoul Plaza, Gwanghwamun Square, the streets around Gwanghwamun and so on will become the stages for our performances. There will be no boundaries between the audience and actors, or between the genres of arts such as fine arts, dance, theater, music and so on. They will be integrated together, showcasing a new form of performing arts to the people of today.”

Starting from Oct. 1, diverse performing arts groups from Korea and abroad will turn various locations including the Cheonggye Plaza, Cheonggyecheon-ro, Saejong-daero, Deoksugung Doldam-gil, Seoul Citizens Hall and Seoul Station into stages and hold about 50 performances throughout four days, under the slogan “Let’s play in the street.” 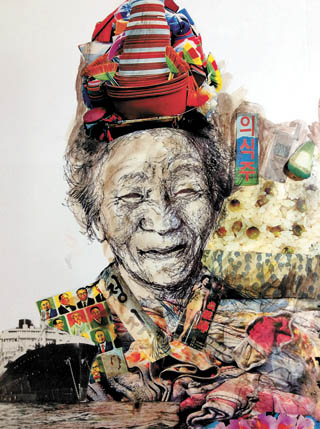 In the spirit of the theme, Kim invited various groups from overseas that are known for their extravagant outdoor and street performances. One of them is the “Wired Aerial Theatre” from the United Kingdom, which has been invited to present its show “As the World Tipped” as the festival’s opening performance.

This aerial show, which will be performed at Seoul Plaza, involves a large stage set up high in the air, hanging from a crane. The actors and actresses appear suspended by wires and start to perform on the stage, which begins to tilt, turning into a huge screen showing footage of serious environmental problems. The show will be performed three times on Oct. 1, 2 and 3 at 8 p.m.

There will also be a joint performance by Korean and French actors at this year’s festival. The show by Compagnie Adhok and a group of Korean actors, titled “Great Escape,” tells the story of a group of elderly people who escape a nursing home after discovering that an open emergency door in the cafeteria.

Holding their lunch trays, they walk through the streets in a line. At first they are dumbfounded, but the citizens they pass cheer them on and give them a helping hand. After a long journey through town, they throw their lunch trays to the ground and declare their freedom.

“Korean actors who have already retired joined the French team for this collaboration project,” said Kim. “Korean actors are currently rehearsing together and when we told them about the meaning of this street play, they were really touched by it and some shed tears saying it doesn’t seem like a play but reality.”

Kim said that through this street performance, he wants to show that festivals are not only for young people.

“Regardless of age, festivals should be enjoyed by everyone,” said Kim. “Of course that can’t be the case for rock music festivals, but for this kind of street art festival, it is possible for everyone of different ages to enjoy together.” 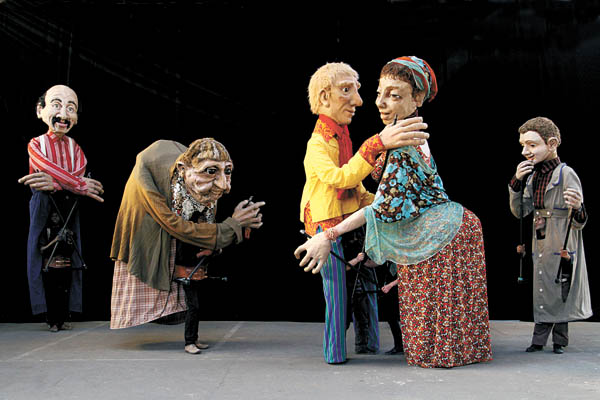 As this year also marks the 70th anniversary of Korea’s independence from Japanese colonial rule, Kim decided to close the four-day festival with a special street parade called “Grandmother’s 70th Birthday Party.” On Oct. 4 beginning at 8 p.m., an 8-meter-tall (26-foot) grandmother puppet named Young-ja will be pulled through the streets starting from Sejong-daero in central Seoul. The giant doll is currently being created by the Theater Company Seoul Kedam and Hwarang Art Pyrotechnics.

“I’m quite nervous about this event because we’ve never done this before and I don’t know how the puppet will turn out,” said Kim. “But it will be very meaningful for families and friends to come out and look back on our 70 years of history together while parading with this grandmother, Young-ja.”

From 10 a.m. on Oct. 4, Saejong-daero will be closed to traffic and the “birthday party” will be held with various street activities.

“There are various participatory events for the citizens to enjoy,” said Kim. “I want them to know that theater, performances and art are not so distant.”

For more information about the festival, visit www.hiseoulfest.org.