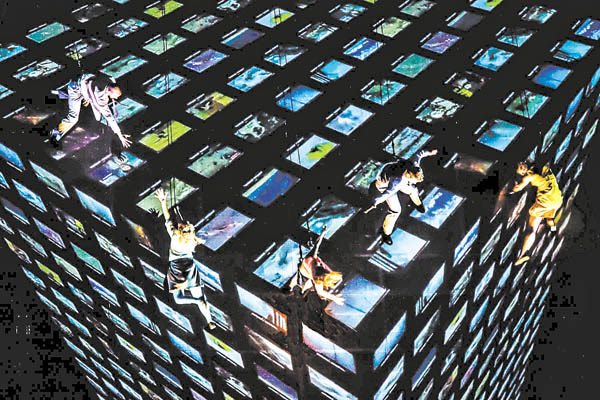 The U.K.’s Wired Aerial Theatre will present “As the World Tipped” as the opener for this year’s Hi Seoul Festival on Oct. 1. Provided by the organizer

The Wired Aerial Theatre from the United Kingdom will be performing a breath-taking show high in the air yet send a message on environmental issues on Oct. 1 as the opening for this year’s Hi Seoul Festival at Seoul Plaza. After premiering in 2011 at the U.K’s Norwich and Norfolk Festival, the show has been opening and closing major festivals across the world. But this year’s Hi Seoul Festival will be the team’s first Asian premier. To find out more about the show, the Korea JoongAng Daily conducted an email interview with the theater company. Here are some excerpts from the interview.

Q. “As the World Tipped” deals with climate change and ecological issues. Why and how did you start this performance?

A. This performance began from both a technical point of view and an ambition to work with a particular well-known director, Nigel Jamieson. When Jamie Ogilvie, who is the technical director of the company, had the idea to create a stage that could be horizontal as well as vertical and usable by performers in both of those arrangements, we knew we had something incredible in the making. With such a fantastic and unique structure, we thought it would be the perfect project to approach Nigel to see if he would like to produce and piece of aerial theatre with us.

The wall takes around seven hours to build and is lovingly installed by a team of six dedicated crew. However the whole production is built over two days including all aerial tests, rehearsals and focusing. The performers spend the days rehearsing the ground-based section of the show and reviewing the footage from previous shows so we can make sure that we perform to our absolute best. We also have quite a hefty set up of the props on stage for the opening scene so we take time to organize these as well.

The artistic director of Hi Seoul Festival had ambitions to establish the Hi Seoul Festival as the country’s signature street art festival, but had concerns that Koreans are not yet familiar with this style of festival. How large are street festivals are in Europe and how significant are they?

We are based in the U.K. where we have many established, large street arts festivals. In the U.K. these festivals are usually supported by the arts council and by the local government as it is widely recognized that they are enormously successful in bringing communities together in a spirit of positive celebration, often also generating tourism and creating enormous economic benefits for the cities or towns where they are held.

For many artists in Europe, the act of performing in the street is itself a very political act - a reclaiming of public space for the people, and an opportunity for people to play, celebrate and connect with one another, if only for a short time. For us as artists, these festivals are inspiring for their creative possibilities: Large outdoor festivals enable artists to create performances that would simply not be possible in the more restricted confines of a theatre. Additionally, outdoor festivals in public spaces, often presented for free, reach audiences who may not normally choose to come through the doors of a theatre, gallery or concert hall. We very much admire the work that is being undertaken by the Hi Seoul Festival and it is a great honor to be invited to bring our show to share with the people of Seoul in such an important location.