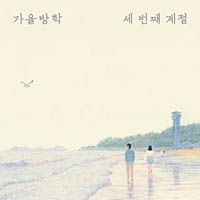 
Autumn Vacation is a rising folk band that consists of guitarist and producer Jung Ba-bi and Lim Su-jin, a vocalist who goes by the stage name Cinnamon. After debuting in 2009, the duo recently released a new album, “3rd Season,” which demonstrates a nice blend of piano, guitar and percussion, among other instruments. It’s not particularly dynamic, but tame, mellow and pleasing to the ears. As such, their music resembles the kind that doesn’t stand out but instead is nice to have in the background.

Certain tracks like “Bird” and “Flat Shoes” attempt to be more upbeat and dynamic, but the execution seems to go awry. The vocals, which are already soft and delicate, get lost in the forceful, raucous melodies. By contrast, certain tracks like the title track, “Saha,” have much more subdued acoustics that consequently bring out more of the vocals, making it sound a lot more raw, crisp and poignant.

Rather than focusing on a couple songs, it is more enjoyable to listen to the entire album from start to end, to experience it as a whole.