President praises the value of the media

President praises the value of the media 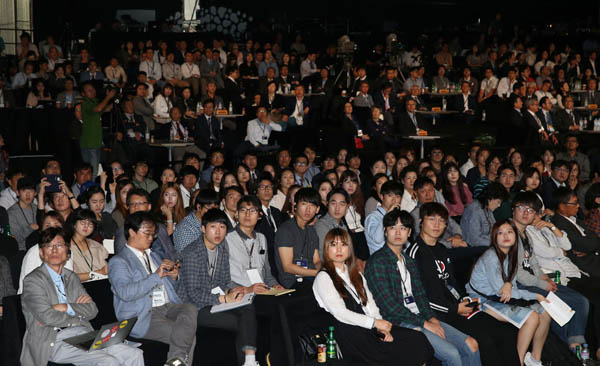 Praising the role of the JoongAng Media Network for Korea’s growth and advancement, President Park Geun-hye promised Monday that the government will put more effort into developing Korea’s media industry to become a leader in the global market.

The Know Way Out media conference, attended by world-class experts in the media industry, took place Monday at the Dongdaemun Design Plaza in Seoul.

“Over the past 50 years, the JoongAng Media Network has accompanied Korea as it has grown and advanced,” Park said.

“By offering various information and constructive criticism, it has presented ways for the nation to move forward each time it has faced a critical turning point. It also put forth significant effort to unite the country and resolve conflicts on the Korean Peninsula.”

The digital revolution of our time, she said, has brought about an immense change to the global news landscape, while at the same time, expectations and concerns over media’s role have mounted.

Because the public is exposed to an enormous amount of information and false information can spread rapidly, the role of the media as a watchdog and conveyer of the truth has become more important than ever, she added.

“I hope the JoongAng Media Conference can serve as an opportunity for the creation of a new future for Korea’s media, and I look forward to a fruitful outcome,” the president said.

Park also mentioned that the country was at a critical juncture, which had prompted her to call for initiatives in which to reform the public sector, labor market, financial industry and education sphere.

“To walk on the path of change and innovation, the media’s role is incredibly important,” she said, requesting that the JoongAng Media Network serve as a “lighthouse” to present a clear vision to the country.

Before attending the opening ceremony of the conference, Park talked with JoongAng Media Network Chairman Hong Seok-hyun. She gave the congratulatory speech after Hong opened the event.