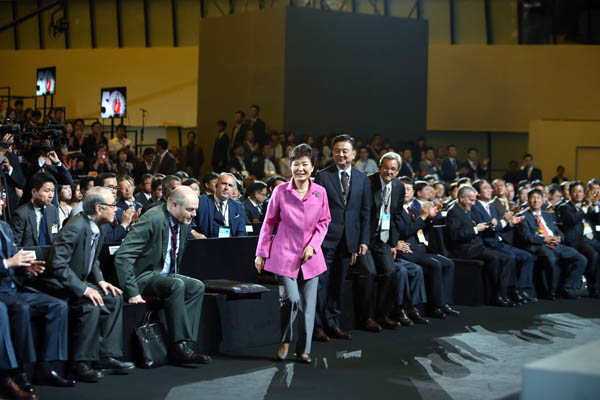 President Park Geun-hye walks to the podium Monday to give a congratulatory speech at the JoongAng Media Conference, an event celebrating the 50th anniversary of the founding of the JoongAng Media Network held at the Dongdaemun Design Plaza in Seoul. By Park Jong-keun

The JoongAng Media Network on Monday hosted the JoongAng Media Conference in celebration of the 50th anniversary of its foundation, an event that was attended by a dozen global industry experts.

The forum’s honored guests spoke about the transformations within the industry over the past decade, giving their presentations before some 1,500 audience members.

Journalists and media experts took part in the day-long event, expanding on their successes and detailing the challenges in adapting to an ever-changing media landscape shaped by the emergence of digital platforms. 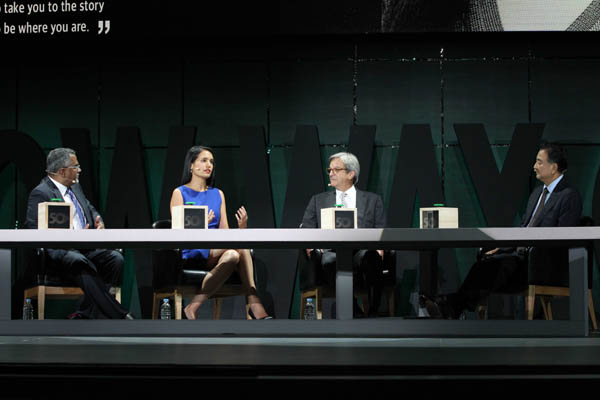 From left to right: Raju Narisetti, senior vice president of strategy at News Corporation; Kristie Lu Stout, an anchor and correspondent at CNN International; Mike Perlis, president and CEO of Forbes Media; and Hong Seok-hyun, chairman of the JoongAng Media Network, speak at the JoongAng Media Conference. By Oh Jong-taek

President Park Geun-hye also made an appearance at the Dongdaemun Design Plaza to mark the event and offered congratulatory remarks before a packed audience.

“Over the past 50 years, the JoongAng Media Network has accompanied Korea as it has grown and advanced,” she said. “By offering various information and constructive criticism, it has presented ways for the nation to move forward each time it has faced a critical turning point.”

She continued that at a time when the media industry is undergoing significant changes, particularly with the increase in the number of digital products and information, the role of media companies to provide balanced news based on facts is more important than ever.

She further expressed her wish that the conference on Monday could mark the beginning of realizing that goal.

JoongAng Media Network Chairman Hong Seok-hyun also gave opening remarks, in which he stated that he hoped the forum could serve as an invaluable opportunity to outline ways to transcend the challenges posed by shifting trends in news consumption.

Hong added that ideally, the conference could reveal the path to which the media could create a platform to set quality news content apart from the flood of digital information.

“We care about public sentiment, but we will not pander to it,” he said. “We respect the majority opinion, but at the same time we will listen to the minority.”

The presenters also shared their experiences working in the media industry, which is in the midst of a transformative era defined by digital products. Such changes were summed up by Mark Perlis, the president of Forbes Media, who noted that media had experienced a “very disruptive time” over the past decade, with trends in digital platforms constantly emerging.

Mark Thompson, the president and CEO of The New York Times Company, noted his company’s commitment “to a particular vision of great journalism” that is “truthful, insightful [and] fearless - utterly free from commercial influence,” even at a time when the media industry is under pressure to adapt in the digital age.

“This tradition dates back to 1896, when Adolph Ochs bought The New York Times. He famously said that his intention was ‘to give the news impartially, without fear or favor, regardless of party, sect or interests involved,’” he said.

He noted that a top priority of The New York Times was to support and develop its website and applications so that it “can provide the best, most comprehensive experiences” for its readers while expanding its audience through “some third-party digital products and platforms.”

Media expert Earl Wilkinson also stressed the importance of diversifying revenue sources in ways that could not have been imagined in the pre-digital era. To illustrate his point, he cited a media company in Norway, which he said was making more revenue via its reader weight-loss program than its newspaper business.

At the beginning of his presentation, he put up a photo of a rope being burned on both ends, with one end represented by conventional media like The New York Times and The Washington Post, and the other by new industry players like The Huffington Post and Buzzfeed.

He judged that, in the end, conventional media forces would find themselves in the middle of the rope, indicating that they would eventually have to adopt or improve upon the digital features touted by newbies to the industry.

Sohn Suk-hee, an anchor for JTBC’s flagship news program, News Room, and widely considered the most credible journalist in the Korean media industry, took the stage for the last session in the conference’s first half.

One of the key objectives he had set out to achieve as the head of JTBC’s newsroom operations, he said, was to continue raising the bar, even when the current media landscape demanded a fast shift toward new agendas.

“As the industry becomes more digital, news is consumed faster and becomes fragmented,” Sohn said. “But this increases the importance of the role of journalism, which is to set the agenda to bring about change in society.”

The second half of the session launched with a Q&A-style talk hosted by Chairman Hong and joined by CNN anchor and correspondent Kristie Lu Stout, Forbes Media President Mike Perlis and Raju Narisetti, the senior vice president of strategy at News Corporation.

Hong started the session by asking Narisetti if he agreed with the bleak view that “traditional media companies are no longer competent and experienced enough to tackle challenges.”

Later, when asked if she could give a piece of advice to aspiring journalists, Stout answered that reporters and writers had to be “insanely curious about the world” and not be afraid to get “out of their comfort zones.”

K-pop star Psy was also among the presenters onstage and touched upon his “surreal” rise to fame with the aid of social media. His worldwide smash, “Gangnam Style,” went viral in 2012, making it one of the most-watched videos on YouTube.

Kim Young-hie, 79, a veteran journalist and columnist at the JoongAng Ilbo who has worked for the company since its establishment in 1965, wrapped up the conference later in the afternoon by citing a famous quote by Adam Michnik, a well-known Polish journalist.