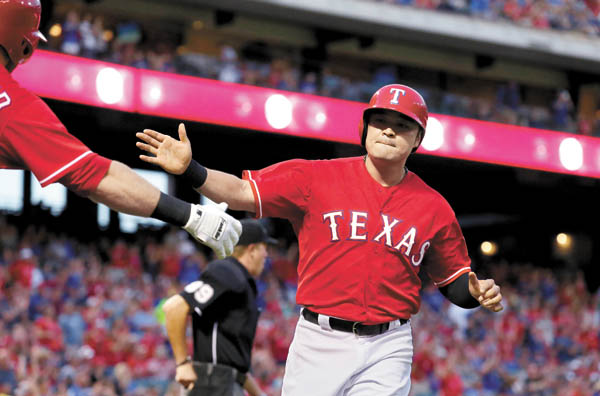 The Texas Rangers’ Choo Shin-soo celebrates scoring from third base on an RBI-single by teammate Mike Napoli during the first inning of a baseball game against the Seattle Mariners in Arlington, Texas, on Saturday. Choo found his form in the second half of the season. [AP/NEWSIS]

No one thought Texas Rangers outfielder Choo Shin-soo would rebound. In the first half of the Major League Baseball (MLB) season, the 33-year-old lefty batter was in a serious slump.

At the end of April, Choo, who joined the Rangers in 2014 from the Cincinnati Reds, had a .0094 batting average, the worst in the league. In June, the Busan native had a few words with manager Jeff Banister about his defensive plays.

Throughout the season, Choo has been frequently challenging himself with new roles, as his batting position changed from leadoff hitter to eighth batter. But the former Seattle Mariners and Cleveland Indians player slowly started to recover his form after the All-Star Game break in mid-July.

In particular, for September alone, Choo is marking a .441 batting average, a .568 on-base percentage with a .618 slugging percentage.

Thanks to his recent performance, the Rangers are now leading the American League West division, edging the local rival Houston Astros by one game.

With Los Angeles Dodgers pitcher Ryu Hyun-jin sidelined by a shoulder injury in the beginning of the season and Pittsburgh Pirates infielder Kang Jung-ho ending his season last Thursday after a slide by the Chicago Cubs’ Chris Coghlan broke his left knee, Choo will be the only Korean big-leaguer to display his talents to local fans.

In an interview with Joins America, an affiliate of the Korea JoongAng Daily, on Sept. 5, Choo revealed that admitting the fact that he can’t always play well was the start of riding out the slump. The 2010 Asian Games gold medalist now knows baseball is something he can’t control alone.

Q. Your batting improved in the second half of the season. What happened?

A. I get more line drives these days, meaning my quality of hitting got better. Since I produce a lot of hits from outside pitches, which is my favorite, my batting sense from the past is returning. Earlier this season, I swung for pitches, but in recent weeks, I have been raising my concentration.

You can’t produce hits when you are off-balance and try to hit from a bad pitch. It’s important not to get deceived by a pitch. Then I can get base-on-balls. Sometimes I do get hit by a pitch. But my duty is to go on-base for my team.

Do you feel baseball is difficult when you are struggling?

There are times you just can’t perform well even if you prepared thoroughly. I don’t even get a blooper single much. Instead, I can see a well-hit ball getting caught by opponents. It’s regretful and sometimes maddening when those things happen, but I wait. I tell myself that I can get a hit and a home run at the next opportunity. As time has gone by, it is becoming that way. When you put your best effort forward, it will bear fruit someday.

Now you are a league veteran. What has changed from the old days?

When I was young, I went for lot of exercise to increase my power. Now, I focus on maintaining my condition and increasing durability. I also now care about rookies or players who just got transferred to our team. People say baseball is a sport about data, but I keep feeling that these days, the root of this sport is the team.

Do you think the Rangers can advance to the playoffs?

Every day, we are having difficulty advancing to the playoffs. Personally, when I was with the Cincinnati Reds in 2013, I experienced the bitterness of not playing baseball in the autumn. Then, we had a wildcard game against the Pittsburgh Pirates but lost 6-2. I missed “what could have been.” But this year, I want my team to be in the playoffs. The Rangers have never won the World Series. I want to be the main character in this year’s post-season.

What’s the best thing you’ve done in your life?

Becoming a baseball player was a good decision, but you can’t always play baseball. Considering that, my best decision was to get married to my wife. She cares for me while raising three children, which is moving and respectful. Since I’m a baseball player, I can’t carry out the father’s role well. However, my wife does my role, too. Many would think a big-leaguer’s wife would have a lavish and fancy life, but it isn’t. She lives the simple life and assists her husband

The Nexen Heroes’ Park Byung-ho is being watched by many MLB clubs, and he could be the next Korean player in the MLB. What’s your advice?

Getting an opportunity to a challenge in the new world is not easily given. When you have a chance, you’ve got to grab it. Of course, there will be hardship, but once you overcome those, you can get your reward. Not only Park, but I welcome other Korean players coming to the United States. But first, they have got to have enough skills and prepare well to become their team’s essential player. Finally, players have got to realize that they are representing Korea even if they are playing in the United States.