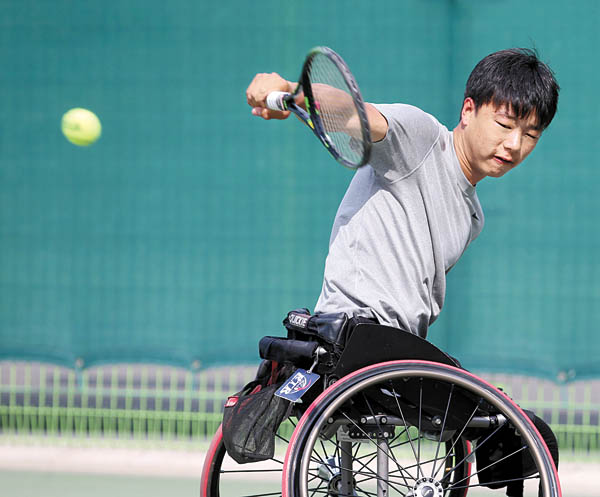 Im Ho-won, 17, is a rising prospect in Korean wheelchair tennis. He is currently ranked No. 35 in the world and is looking to compete in the Rio Paralympics next year. Provided by the Korean Paralympic Committee

The Korean tennis scene has been buzzing about Chung Hyeon and Im Ho-won.

Chung collected his first major tournament victory at the U.S. Open earlier this month, and Im has also been performing well.

But there’s one major difference between the two - Im plays tennis from a wheelchair.

Im reached the quarterfinals at the U.S. Open USTA Wheelchair Tennis Championships in St. Louis two weeks ago. The 17-year-old was ranked 123rd in December, but is now ranked 35th in the world.

“The top 34 can go to the Rio Paralympics next year,” said Yoo Ji-gon, who coaches Im. “At this moment, Im is in the closest position.”

At the age of eight, Im was hit by a truck and lost his legs. He was hospitalized for two years, and while he struggled with depression at the time, he found hope in tennis.

“A person who was sharing my hospital room gave me a tennis racket and ball,” Im said. “I first showed up at the tennis court when I was 10 years old, but I’d say that at the time, I was playing with a ball more than I was playing tennis.”

In wheelchair tennis, players use a wheelchair that has two big wheels and three auxiliary wheels. The sport uses the same-sized court as traditional tennis, but allows two bounces.

Even with the exception, it is still one of the toughest sports for the
disabled because of how much energy it takes to move a wheelchair so
quickly.

“Honestly, it’s really physically challenging, so I wouldn’t recommend it,” Im said. “However, I love the sport because I feel like I’m flying on the court when I play. I was depressed after the accident, but I became a positive person after playing tennis.”

Im began to compete in tournaments at the age of 13, but since there were no wheelchair tennis players his own age, he played with adults. Im was usually defeated, but the challenge of playing against more developed opponents led him to quickly become a formidable player.

From 2013, Im received support from the Sports Toto tennis club and began to participate in International Tennis Federation tours to raise his world ranking.

“In the past, I had to put up my own money to compete in tours, but now I can play with world-class players,” he said.

Im is currently a student at Samil Commercial High School, which is the alma mater of Chung Hyeon. Despite Im’s disability, the school’s tennis team coach, Chung Suk-jin - who is also the father of Chung Hyeon - gave Im a sports scholarship to the school.

Just like Chung, Im is also focused on playing a bigger role on the world stage.

“We have different practice courts, and since he is busy playing tours, we haven’t seen each other that often … possibly twice or so,” Im said. “But I envy him for playing in the big leagues. I want to be like him.”

In Japan, Shingo Kunieda, who is the world’s top-ranked player, serves as a global brand ambassador for Uniqlo alongside fellow Japanese tennis player Kei Nishikori. He reportedly gets more than 2 billion won ($1.7 million) in sponsorships a year.

Im knows he has long way to go become like Chung or Kunieda, but said he will keep trying.

“I know my skills are not that good at this moment,” he said. “But I will put my best effort forward to become a player who can widely promote wheelchair tennis.”