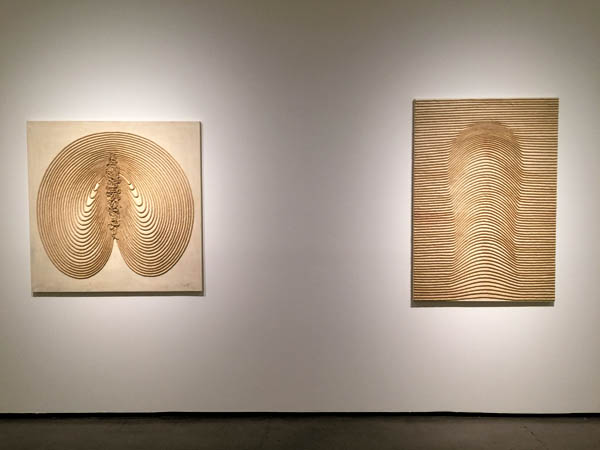 Pieces created in the 1960s and ’70s using rope on canvas by Lee Seung-taek, 83, an artist who recently gained international recognition, are now on display at Gallery Hyundai in central Seoul. By Moon So-young

A group of abstract works created with rope on canvas are now on display at Gallery Hyundai in central Seoul as part of Korean artist Lee Seung-taek’s solo show, “Drawing.”

The works by Lee, a cross between two-dimensional drawings and three-dimensional sculptures, were created in the 1960s and ’70s but have seldom been shown to the public. It was because the artist, now 83, remained obscure until he gained recognition in the past few years.

“My unique ideas were not accepted,” he told reporters at the gallery last week. “I was ostracized by both powers in the Korean art scene: the mainstream artists, who focused on abstract paintings including dansaekhwa [abstract monochrome paintings], and the people’s artists.” The latter mainly created realist paintings with strong political messages.

Now Lee is a hot artist internationally. He was invited to the Frieze London art fair’s “Sculpture Park” show for the second straight year.

The gallery is now working with several experts on Lee’s catalogue raisonne, or annotated listing of all his the known works. It is being written in English and will be released by a major foreign publishing house next year, Director Cho Jeongyol said.