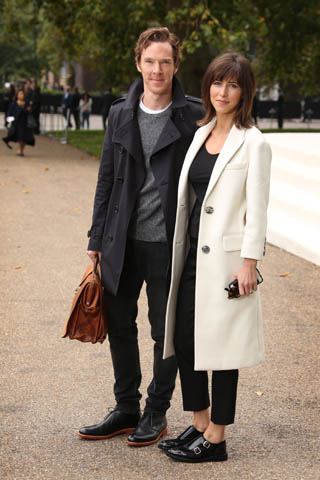 LONDON - A live orchestra, a starry front row, clothes boasting a proud British heritage and craftsmanship: Burberry knows how to put on a crowd-pleasing spectacle.

The luxury British design house blended fashion with entertainment in its biannual display at London Fashion Week Monday, a well-oiled production and a key event to boost sales and brand prestige. Actors Benedict Cumberbatch, Sienna Miller and Naomie Harris squeezed in the front row, joining a posse of models led by Kate Moss and Cara Delevingne.

A new talking point this season was the live music: Burberry has put on music performances before, but not like this. Models sashayed around an orchestra pit housing a 32-piece orchestra and singer Alison Moyet, who starred center-stage in the middle of the tent.

The clothes, of course, are the main selling point, and Burberry makes sure there is something for everybody. A key theme is mixing elegant with street cool. There were lots of opulent black and gold English lace, wispy sheer outfits and silk slip dresses, dressed down with unbuttoned fluid trenches, nylon rucksacks and sporty flat sandals - casual gear that could have been worn by any college student, if not for the giveaway gold chain and buckle details.

The brand’s best-known beige trench took a backseat to military-style outerwear - black and navy pea coats with bright gold piping and gold buttons, which design chief Christopher Bailey said were made by the same company that dresses Britain’s royal guards.

If the show didn’t feel particularly summery, what with the mix of silks and heavy coats, it’s because Burberry wants to cater as many international customers - especially those in China, a big part of its market - as possible.

Under Bailey, Burberry has aggressively used social media and technology to expand its market reach and entice new customers. The brand has live-streamed its show to millions worldwide via its many online platforms for several seasons, and offers new merchandise for instant purchase. Monday’s show was for the first time previewed the previous evening on the social messaging platform Snapchat, which meant that users saw the collection before it was officially unveiled at the show.

It does raise the question: Will the fashion show soon become obsolete? Bailey doesn’t seem to think so, and said there’s still a place for putting on an expensive event for live guests.

“There’s room for everything, I don’t think one thing cancels the other,’’ he said.
AP