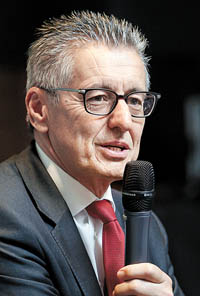 Atlas Copco, a Swedish industrial machine manufacturer with interests in 180 countries, plans to increase investments and carry out M&As in Korea as part of its effort to increase its presence in Asia, Ronnie Leten, the company’s CEO said.

“In Korea, there are many companies that have global influences in the world,” the 59-year-old said during his visit in Seoul on Monday. “Since Korea is one of Asia’s best production bases, we will strengthen our partnership with the country.”

Established in 1873, Atlas Copco has been a leading company in the world’s industrial machine and operating-related businesses, making compressors and other equipment in 180 countries. Last year, the company earned 103 million euros ($115 million) in revenues.

Leten started his career at Atlas Copco in 1985 and became head of the company in 2009. Since last year, he has also chaired the board of directors of Electrolux.

“Korea is the second-largest market in Asia after China,” said the CEO. “Korea will be a strategic base for the Asian vacuum pump market, and we will eventually expand our business territory in the world later.” The vacuum pumps are used for manufacturing and transporting semiconductors.

Atlas Copco established the Seoul branch, Atlas Copco Korea, in 1981. When asked about the Korean manufacturing industry, the CEO said Korea is a country that has excellent infrastructure, including production lines operating under world-leading conglomerates like Samsung, Hyundai Motor and LG.

Atlas Copco said one of the keys to its success in Korea was their aggressive M&A. “We absorbed some businesses last year, and we are considering additional works in Korea this year as well,” the CEO said.

The company acquired an English vacuum pump maker, Edwards, that has two production plants in Korea.

Through the acquisition, the company expects to boost its revenue from last year’s 155 billion won ($131 million) to 650 billion won this year and to 1 trillion won in 2020.

The Seoul branch is the seventh largest among Atlas Copco’s global offices, and it has been cooperating with diverse firms in car, construction, heavy industries, electronics and logistics. Edwards also acquired Korean firm Apsys, which is involved in DC plasma technology that helps remove poisonous gas during the production process of semiconductors.

“Once again, Korea is Atlas Copco’s core market, as the country has high-level infrastructure that comes up with high-end tech with competitive and hard-working employees,” Leten said. “Through businesses in Korea, I hope Atlas Copco will grow and contribute to the country’s overall industrial development with the techniques and knowledge we earned since our establishment.”