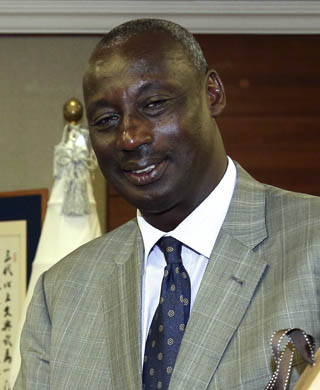 The Korean Ministry of Foreign Affairs on Tuesday refuted reports that the death of the Ugandan interior affairs minister on a flight home after a weeklong trip to Seoul was a result of him being denied proper access to medical care during the visit.

Ugandan Interior Affairs Minister Aronda Nyakairima, 56, died of a heart attack on Sept. 12 on the plane on his way back home from a flight from Seoul en route to Dubai.

The four-star general who had formerly served as chief of Uganda’s defense forces was returning from a visit to Korea from Sept. 8 to 11 upon the invitation of the Korea Foundation, affiliated with the Foreign Ministry.

According to Ugandan media reports, President Yoweri Museveni alleged last week that Aronda may have been denied proper medical treatment in Korea because he was not covered by health insurance.

A postmortem concluded Nyakairima had died from heart failure, and Museveni said that the minister had suffered from mild hypertension for many years and had two heart attacks before.

Another report on Monday by Ugandan newspaper the Daily Monitor quoted a senior government official saying that a protocol official prevented the minister from checking into a hospital when he became sick and instead gave him privately-procured drugs.

But Korea’s Foreign Ministry insists that such reports are not true, a position it explained to the Ugandan government.

“After such reports, our embassy to Uganda explained to the Ugandan Foreign Ministry and Internal Affairs Ministry that it was not true that the late Ugandan internal affairs minister was denied treatment,” said Noh Kwang-il, Korean Foreign Ministry spokesman, in a briefing on Tuesday. “And the Ugandan government expressed that they understood our position.”

The Korea Foundation said that the minister did not request hospital treatment in Korea and that all officials invited from Uganda had been covered under travelers’ health insurance.

A Korea Foundation official who asked to remain anonymous described the minister’s condition during his visit in an interview with YTN on Tuesday.

“At one point he was in considerable pain, but when we asked if he would like to go to the hospital, he said he was fine but asked for medicine,” he said. “So we gave him medicine. On the morning of the day before he left, he took medicine for gastritis, and looked a lot better. Then he completed his schedule and departed.”

He added they had been equally shocked when they heard reports of the minister’s death.

Nyakairima was buried in his home district of Rukungiri in western Uganda in a funeral attended by thousands of people and dignitaries including President Museveni.

He is survived by a wife and two children.