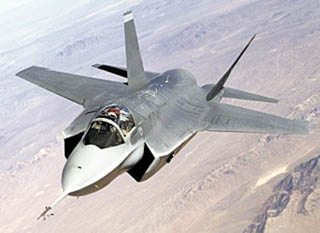 However, it turns out that earlier this year, the U.S. government refused to approve an export license for the transfer of four of 25 technologies, citing security reasons.

The refusal is expected to put a damper on Korea’s ambitions for the KF-X, also known as the Boramae Project. It was supposed to build 120 indigenously engineered mid-level fighter jets by 2025. The jets require those core technologies.

Rep. Ahn Gyu-baek, a lawmaker of the main opposition New Politics Alliance for Democracy (NPAD), said Monday that according to documents he acquired from the DAPA, the Korean military signed a contract with Lockheed Martin last September to buy 40 F-35As for 7.34 trillion won ($6.2 billion).

Because it was a costly deal, it was expected that Korea, through purchasing the costly high-level American jets, would acquire the technology needed to build its mid-level KF-SX jets.

But in April, the U.S. government decided to reject an export license for these four core technologies to Korea.

“With this breach [of contract from the United States],” Ahn said, “the Boramae Project is crashing.”

Consequently, the Korean military will either have to develop this technology on its own or acquire it from another country.

On Tuesday, lawmakers of the National Assembly’s defense committee debated whether this comprised a breach of contract.

Ruling Saenuri Party Rep. Kim Sung-chan declared Washington’s decision “is not a breach of contract” and recommended that the F-X project be reviewed from scratch.

Others accused the Korean government of pushing forward the purchase of the F-35As last year knowing that the four core technologies may not be transferred.

Saenuri Rep. Yoo Seong-min, chairman of the defense committee, questioned whether the government “decided there was no possibility of the four core technologies being transferred, so it did not request an export license in the first place and rather, signed up for integrated technology.”

Lt. Gen. Chung Kyung-doo, head of strategic planning for the Joint Chiefs of Staff, admitted at the committee meeting that “we signed the contract knowing that it would be difficult to be transferred the four core technologies.”

“During the negotiation process, Lockheed Martin said that it could provide 21 technologies,” a DAPA official said, “but that it would be difficult to get export approval by the U.S. government for the four technologies requested by Korea.”

The official continued, “However, because they were technologies needed for the development of the fighter jets, the contract included a clause that said there would be the utmost efforts to do so.”

The DAPA is also under fire for changing its story.

Moon Jae-in, chairman of the opposition NPAD, pointed out that the DAPA had said during an audit of the deal last year that the key technologies would be transferred.

“That is what the people believed,” Moon said. “Isn’t that a deception of the people?”

The DAPA official replied, “While we knew that was the United States’ position, if we made this official, we worried that the United States may decide to completely forego any transfer of technology.”

AESA radar is designed to detect targets more precisely, quickly and at a longer range than radar on current Korean fighter jets.

The future of the KF-X project is now in question.

Final approval of the transfer of the other 21 fighter jet technologies from Lockheed is expected to happen sometime in November.

The DAPA also says that some areas of the four core technologies have already been acquired by Korea.