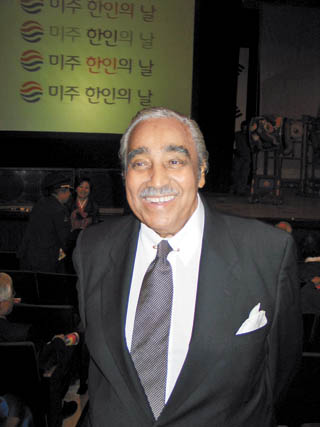 U.S. Rep. Charles Rangel, a Democrat from New York, said there is “not much time left” to push for reunions for the Korean families separated during 1950-53 Korean War.

As an American lawmaker and a Korean War veteran, Rangel has made active efforts to support reunions for families on both sides of the demilitarized zone (DMZ) and urged a resolution for the matter.

“I actively took part in the Korean War 60 years ago despite the danger, and I will also make consistent efforts towards reunions for the families from North and South Korea,” he said during an interview with the JoongAng Ilbo on Sep. 11 at the Rayburn House Official Building in Washington.

Q. After tensions between North and South Korea flared last month, both sides agreed to hold family reunions in October. What’s your opinion on this?

A. I’ve always believed that no matter how serious a problem human beings have, we should do all that we can diplomatically - talking, arguing, cursing - before we start talking about killing each other.

It is estimated that in the United States there are about 100,000 ethnic Koreans whose family members were dispersed.

I haven’t said this publicly but, you know, one of the reasons I fight so hard for the reunions is because there are 30 million African-Americans in the U.S. who have no family to visit in Africa, so you and I know how tragic and painful this separation is. People who look like me … 300 years ago, [they were taken] away from their homes, [and America’s forbearers] deliberately took away our names, our songs, our history and our knowledge, which South Korean-Americans still have. They may have found a new home, but they never will forget what they have in Korea.

Many of the Koreans separated from their living relatives are elderly now.

Time will soon eliminate that possibility. You know why so many people in Korea love me? Because there aren’t too many people alive like me - those [who] make it to 85 years old. Korea is always trying to thank America and the countries that came to her defense, so it’s natural that … I get more appreciation than I really deserve.

What do you think about the concerns over North Korea’s actions, especially with the reunions a month away?

I’m concerned about the lack of understanding by the leader of North Korea. I spoke with many people in mainland China who are just as concerned as I am. Because of the lack of responsibility, reliability and direction … it is difficult for anybody to understand thinking of the actions of the people who lead North Korea. The killings, the executions, the arbitrary decisions, torpedoing boats…

Do you have any plans for holding reunions more often?

My problem, and my only problem, is that as an individual, as a member of Congress, as an American, I am restricted by the foreign policies of my country. So no matter what I want to do, I cannot violate the spirit of the law in terms of going into countries [on which bans are in place]. But I’m prepared. I’ve taken risks for 60 years. Go ahead. I’m prepared to do whatever I can legally and morally to facilitate the reunions.