About 1,000 guests applaud to celebrate the 50th anniversary of the founding of the JoongAng Media Network at the Dongdaemun Design Plaza in Seoul on Tuesday.By Kang Jung-hyun

The first day of the JoongAng Ilbo’s next 50 years has begun.

The JoongAng Ilbo held its 50th anniversary ceremony on Tuesday at the Dongdaemun Design Plaza (DDP) and set new goals for the next half century.

JoongAng Ilbo and JTBC Chairman Hong Seok-hyun declared the vision of the newspaper in the future: “A representative media of Asia that looks at the world from the perspectives of Asians.”

This is broader than “the public’s paper” vision declared when the newspaper started in 1965.

“The JoongAng Ilbo will contribute to making Korea a country that attracts human resources and capital from all over the world by healing the ideological breach, easing tension between the two Koreas and pursuing peace among Korea, Japan and China,” Hong said. “We will keep doing our best in the next half century so that all 50 million Koreans can think and make judgements based on the JoongAng Ilbo and be moved by us.”

Hong said any vision for the JoongAng Ilbo would require ideas for how to survive in a digital world. 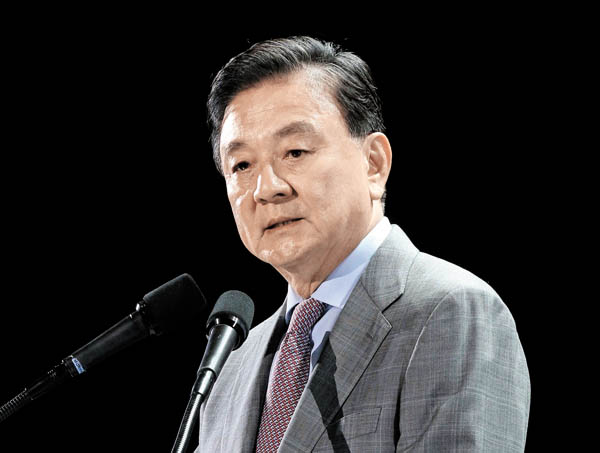 “The very existence of traditional media is shaken in the digital environment with smartphones and social networking services,” Hong said. “Therefore, we are leading ourselves down a road that nobody conceived of before.

“We’ve concluded that the media is like a cell membrane,” he continued. “We will connect all media in the JoongAng Media Network into an organic body.”

Japanese Ambassador Koro Bessho, who attended the ceremony to make congratulatory remarks, knelt to have a chat with former Prime Minister Kim Jong-pil, who was in a wheelchair. Bessho had visited Kim when he was first appointed ambassador to Korea, and they have met several times since, including when Kim’s wife, Park Young-ok, passed away earlier this year. U.S. Ambassador Mark Lippert came with four bodyguards. He refused any special treatment and mingled with many guests. Canadian Ambassador Eric Walsh also attended and said he was very interested in the memoirs of Kim Jong-pil, which are being run as a series in the paper.