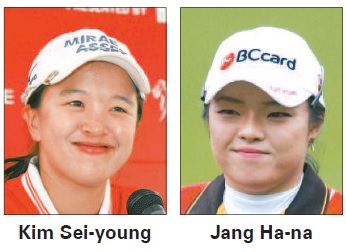 Just before the Chuseok holiday, local fans will able to see a clash between overseas-based Korean golfers and KLPGA Tour golfers at the YTN-Volvik Women’s Open, which runs from Thursday to Saturday.

The tournament features top-class golfers who are based in United States or Japan. Among them, LPGA Tour rookie Kim Sei-young will be playing for the first time in front of locals this season.

Kim is currently in the lead for LPGA Rookie of the Year after collecting two wins on the tour this season. Though the 22-year-old hasn’t won an event since April, she hopes for a rebound in her first appearance on the KLPGA Tour this season.

Kim won five KLPGA Tour events before she moved to the United States.

Another LPGA rookie, Jang Ha-na, will be having her fifth event in Korea. The 23-year-old, who is currently fourth in the LPGA Rookie of the Year ranking, has not won a single event on the tour this season.

But in Korea, she has finished in the top five in all four of the events she competed in, including a victory from the BC Card-Hankyung Ladies Cup in June.

Following them will be Baek Kyu-jung, who is also known as Q Baek in the United States. She is ranked seventh in the LPGA Rookie of the Year race and will be playing in front of local fans for the second time.

Choi Woon-jung, better known as Cheolla Choi, is also coming to Korea. The 25-year-old, who collected her first LPGA Tour victory in July by winning the Marathon Classic, is joined by Lee Mi-hyang and Lee Il-hee, who both tied for fourth at the LPGA Tour’s last major of the season, the Evian Championship, two weeks ago. All three are sponsored by golf ball manufacturer and the event’s main sponsor Volvik.

Hur Mi-jung and Lee Mee-na will also be returning from the United States.

From Japan, Kim Ha-neul is returning with a trophy in her hand after she collected her first victory in the JLPGA Tour by winning the Munsingwear Ladies Tokai Classic last week. Kim is a two-time prize money leader in the KLPGA Tour.

However, the KLPGA Tour golfers are not likely to go easy on their opponents, because for them, various tour titles like prize money and MVP are on the line.

Chun In-gee, who has four wins this season in the KLPGA Tour, is currently the leader in MVP points, most wins and average score, but the 2015 U.S. Women’s Open champion is closely chased by Lee Jung-min.

Lee, 23, enters the event as the defending champion, which she says gives her more confidence..

“Last week, I got a cold so my condition is not that good, but I’m recovering my health,” she said. “I try to make my putt comfortable these days and I think my middle range putts got better.”

Park Sung-hyun may be coming to the event in the best condition as she pulled off her second victory of the season last week at the KDB Daewoo Securities Classic.

Park, who turned 22 on Monday, has the tour’s longest driving distance this season at 255.5 yards. She is also the winner of the season’s first major, the Korea Women’s Open.

“I don’t know about the course, but last week, I managed to get a victory at the country club when I played for the first time,” she said. “I have good feeling, so I think I can good results.”

Chun, Lee, and Park are paired in the same group for the first round.