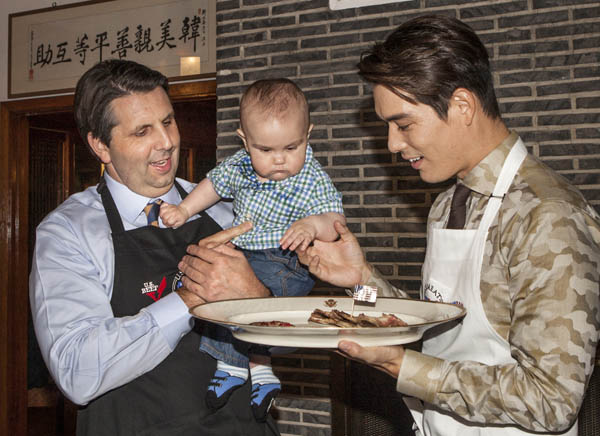 In his first written message to the public as the new U.S. ambassador to Korea - a post on his personal blog that would instantly shape his image as the top envoy - Mark Lippert opted to show a more personal side of himself, in contrast to his predecessor Sung Kim.

While Kim’s first online post heavily relied upon depictions of his work, Lippert refrained from job talk, presenting himself in a more down-to-earth manner.

And food was the perfect vehicle to get that message across.

“If you have suggestions for other Korean food to try or interesting places to go, please let me know. I’m looking forward to eating delicious food.”

The ambassador reiterated his love for galbi (barbecue shortribs) on Tuesday, but this time the 42-year-old put his culinary interests toward a diplomatic purpose, promoting American agricultural products in a brief cooking demonstration at his residence, Habib House, in central Seoul.

Lippert briefly spoke in broken Korean from time to time, while Kim, born to a Korean mother, is fluent.

The actor appears on the SBS television program “Oh! My Baby” with his Korean wife and three children.

“One of my favorite things about Korean food is the side dishes,” Lippert said. “The side dishes make a meal so special [because even with the same main dish, the sides] can make a completely different meal with a different flavor.”

Chuseok this year, the diplomat continued, is especially meaningful because it will be the first for his 8-month-old son.

“It reminds me of the time I came home from college around Thanksgiving. I was a little homesick and the Thanksgiving meal brought back more memories. Even though we’re far away from home today, having this very special holiday with [my son] Sejun, [my wife] Robyn and [my dog] Grigsby reminds me how close my family [is right now].”

Korean cuisine has a certain sense of “experimentation” that makes it ideal for international fusion, the ambassador said in touting the greater potential for trade between both nations’ food industries.

Samgyetang (chicken soup with ginseng) made a successful debut in the American market a few years ago, he continued, adding that it was a “great success story” in terms of trade.

“What makes [Korean food] so unique is that you can change … use different flavors with a great base dish,” he said. “Potential is so limitless.”