GDP will remain as forecast: Lee

GDP will remain as forecast: Lee 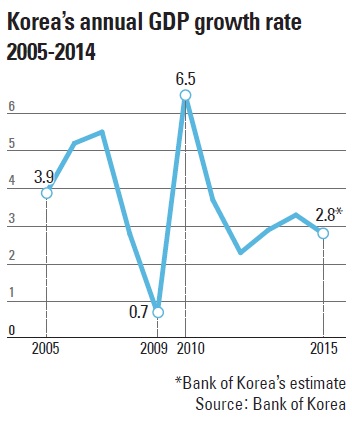 Korea’s economic growth rate this year will not slow to the low 2 percent range as forecast by some banks, the Bank of Korea governor Lee Ju-yeol said during a meeting with economic experts on Wednesday, citing a gradual pickup in domestic consumption as a positive factor.

“Korea’s GDP growth for this year will not veer far out of the 2.8 percent the BOK forecast earlier,” Lee said.

A growing number of foreign banks have lowered their estimates for Korea’s economic growth for this year in recent weeks following weaker-than-expected export data earlier this month, which showed Korea’s exports plummeted at the fastest rate in six years since August 2009.

“There appear to be views that this year’s growth rate may slow to the low 2 percent rage. But even considering the exports slowdown, I do not think it would go that far,” Lee said, adding that there may be “some adjustments” to existing forecasts.

Lee cited recovering domestic consumption as a factor helping to contain the rate of slowdown in economic expansion saying, “We are seeing consumer spending picking up after MERS has been contained.”

The Chuseok holiday was also expected to further fuel consumer spending, he added.

Recent Ministry of Strategy and Finance data showed that retail sales increased 1.9 percent in July month-on-month after falling 3.5 percent in June, the height of the Middle East respiratory syndrome outbreak.

Lee however admitted external challenges existed, such as the slowdown in Chinese growth, falls in commodities prices and their potential impact on emerging economies as well as uncertainties related to U.S. interest rates.

“Since external risks’ impact on Korea’s economy is extensive, we are closely monitoring the situation,” Lee said.

Korea’s gross domestic product grew at an annual rate of 3.3 percent last year and 2.9 percent in 2013. At the height of the global financial meltdown in 2009, the economy expanded only 0.7 percent, though it rebounded at the rate of 6.5 percent in 2010, Bank of Korea data showed.

“Our view on GDP growth rate for this year is 2.4 percent. I think governor Lee’s assessments are rational and achievable technically,” said Park Jeong-woo, an economist at Korea Investment & Securities.

“The question is, how meaningful will that technical achievement be? I think real challenges lurk next year,” Park said, adding that he expected the Bank of Korea to keep the base rate unchanged for the remainder of this year.

“Unless we see the global economy fall into a recession-type slowdown, the central bank will probably keep the rate steady … though I think it will be under more pressure to cut further by the second half of the next year.”

Meanwhile the Asia Development Bank on Tuesday lowered its forecast for Korea’s gross domestic product growth to 2.7 percent from a previous 3.0 percent.