Actor known for villain roles leaves the dark side

Actor known for villain roles leaves the dark side 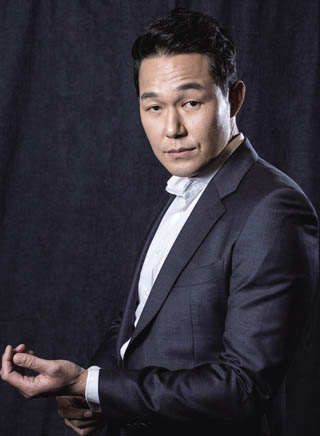 Actor Park Sung-woong is known mostly for his roles as tough, cold-blooded gangsters, murderers or villains.

He has mostly played minor roles, but his presence has hardly been minor.

In the new thriller “Office” (2015), however, he leaves neither a vicious or strong impression. He plays an important role as detective Jong-hun, who investigates a murder case in which a whole family is killed. But he somehow melts into the film rather than standing out from it.

“I’m glad my character melted into the film,” he said in a recent interview with Ilgan Sports, an affiliate of the Korea JoongAng Daily. “In fact, that was the intention. I can’t play the so-called strong roles all the time.” Here are excerpts from the interview.

Q. I find it odd that you chose “Office.” Your character is not a major one, appearing only for a short period of time. It’s also a character where you can’t show a wide spectrum of emotions.

A. In fact, that’s why I chose the film. I did my best so that people won’t be seeing Park Sung-woong in the film. Rather, I wanted the audiences to go, “What did Park Sung-woong do in the film?” after they saw the film. I guess I succeeded: Everyone is talking about actor Pai Song-woo. When the director asked me to show something, I convinced him against it. I was concerned that I would stand out more than I should.

Is this your way to secure a good-natured protagonist in your next work?

I’m not that smart and calculating. I just wanted to widen my filmography. I was cast when I was filming “The Deal” (2015). All roles were filled except detective Jong-hun. My cousin [actor Kim Eui-seong] recommended me for the role, saying, “You just have to be you” in the film. It didn’t take me long to say yes.

It was also rare not to see you pull off some hard-core action. What was that like?

It felt really good, actually. I saw someone on the set and thought he was an extra. But it turned out he was the martial arts director. It goes to show how I didn’t have to meet with an action director at all for this film. It’s actually my first time not spending any time with a martial arts director making a film.

You really catapulted to stardom after your role as gangster Lee Jung-gu in “New World” (2013). Don’t you ever feel pressured to play a role that surpasses Lee Jung-gu?

I still see so many parodies of Lee Jung-gu. And many people still ask me to do his impression. I guess Lee Jung-gu and “New World” will always follow me. It’s also like a mountain that I have to climb over. But I guess a time will come when people will let go of Lee Jung-gu. I also want to try acting in different genres one day - like comedy, for instance.

I hear you have also recommended many emerging actors you know to casting directors.

I do what I can. When I know someone who’s good, I make sure that he or she gets an audition. It’s fair. If the actor is good for the role, he or she will get it. So it’s totally up to the actor and the director - not me. I didn’t study acting in college. [Park studied law.] So I had no one’s help in my early years. That’s why I want to help emerging actors.