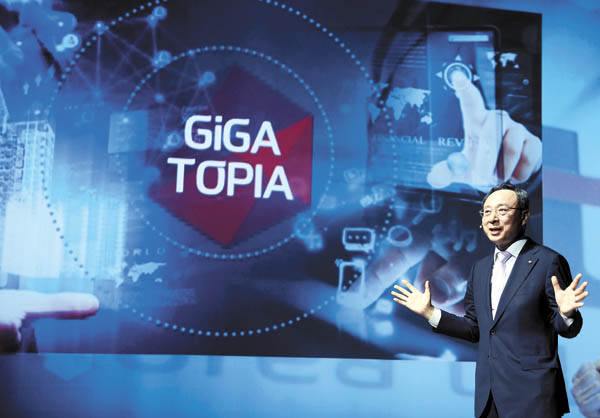 Hwang Chang-gyu, CEO of KT, outlines future business strategies at the headquarters of the company in central Seoul on Wednesday. Provided by the company

Marking the 130th anniversary of the company, telecommunications operator KT said Wednesday it is fine-tuning its focus towards new growth-oriented businesses with investment plans worth 13 trillion won ($10.9 billion).

The initiative indicates that the carrier seeks to go beyond traditional fixed-line and wireless network services, with a large chunk of investments allocated to emerging high-tech sectors like portable security solutions, smart energy, self-driving cars and bioinformatics through the year 2020.

Calling the area “Convergence Service,” the company expects the sector to generate 5 trillion won in sales and 2 trillion won globally by 2020.

The key to future growth, CEO Hwang Chang-gyu said, lies in how the telecom company develops intelligence-based solutions and platforms for established technology infrastructure instead of just churning out faster networks.

“To create greater value, we should integrate ‘intelligence’ into the development of information and communications technology (ICT).”

The move also reflects the consensus in the telecom industry that fixed-line and wireless network services have limited room for further growth. The number of subscribers for landline services is on the decline, while that of cellular phone service remains stagnant.

The number of wireless network subscribers totaled 53.6 million in 2014 and rose by 6.6 percent to 57.2 million last year, according to the Ministry of Science, ICT and Future Planning. The sluggish growth became more evident entering this year, as the number is stuck at 57.9 million as of the end of June, up just 1.2 percent compared to the end of last year.

Hwang demonstrated a set of products under development in relation to the targeted segments.

Among the new product was the Wiz Stick, a portable security platform aimed at safeguarding computers from malicious websites and hacking attempts.

KT said that the device, which will be sold from the end of this year, can deliver a stronger, more comprehensive layer of protection at a network level than conventional anti-virus software solutions.

Software typically works by examining files to look for viruses and programs which might indicate infection. But the Wiz Stick is expected to detect them at earlier phases in a way that monitors the state of the network.

KT has developed an advanced system that helps optimize energy performance by focusing on metrics and accountability to encourage energy-saving behavior.

KT has test-operated the energy management system, called KT-MEG, in 280 different areas around the world.

Korea Electric Power Corporation (Kepco), the state-run electricity provider, has teamed up with KT to map a blueprint for creating a smart energy ecosystem.

Hwang said that KT is keen on exporting the technology abroad.

“We’ve signed a [memorandum of understanding] with Uzbekistan, and other big deals are expected to be reached as KT is in talks with different countries.”

The company is also interested in supporting a network for driverless cars.

At the Mobile World Congress earlier this year, Hwang mentioned the need for a 5G network to operate the advanced cars, saying a driverless car should be able to process at least 1 gigabyte of data per second to run properly.