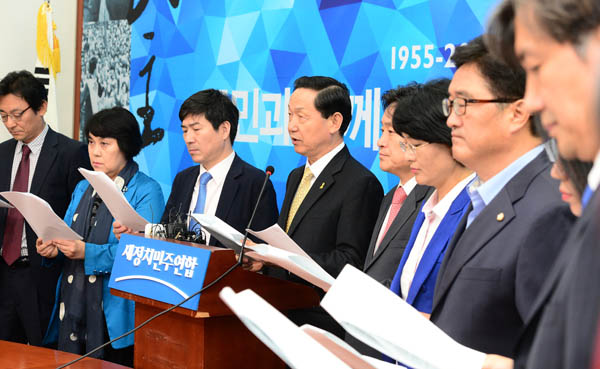 The NPAD Reform Committee, led by Kim Sang-gon, fourth from left, announces a new proposal to reform the party nomination system on Wednesday at the National Assembly. [NEWSIS]

Internal divides in the main opposition flared Wednesday after an independent panel recommended that its chairman run in next year’s general election, while demanding that other senior members make sacrifices in order for the party to gain an edge at the polls.

The New Politics Alliance for Democracy (NPAD) on Wednesday also endorsed a stronger standard for candidate nominations for April’s legislative elections that would bar anyone convicted in a court of law from applying.

The party’s reform committee, led by former Gyeonggi Education Superintendent Kim Sang-gon, came up with the standard, announcing the decision at a press conference later in the afternoon.

He also made a slew of controversial suggestions that immediately sparked protest from senior party members.

“I will demand the party chairman and party leaders to make sacrifices to sway the public,” Kim said. “Chairman Moon Jae-in must withdraw his promise not to run in the next election and bring up the winds of victory from Busan.”

While urging Moon to seek reelection in Busan, where he represents Sasang District, Kim nudged other lawmakers to make sacrifices for the party.

“The party’s former chairmen, including Reps. Chung Sye-kyun, Lee Hae-chan, Moon Hee-sang, Kim Han-gill and Ahn Cheol-soo, must fall in line with the strategic decisions by the party and be open to running in districts where the NPAD is weak.”

After crushing defeats in the by-elections this year, the NPAD requested that Kim overhaul the party to improve its shot at winning. Kim’s committee held its first meeting on June 12 and has since announced a series of reform measures.

Moon said he would seriously consider Kim’s recommendation to run in Busan.

“For the next general election victory, every member of the party needs to make a sacrifice,” the chairman said, “especially those who hold important positions in our party.”

During his campaign running for the NPAD chairmanship, Moon said that he would not seek reelection for his lawmaker seat, an announcement that was widely seen as him hinting at another presidential run.

In the 2012 presidential race, Moon was narrowly defeated by President Park Geun-hye.

In response to Kim’s announcement, Rep. Ahn said that it was politically more important for him to concentrate on his current district than to run in a different constituency to satisfy the party’s election strategy.

“Many working-class families live in my district of Nowon C, and I started politics on the promise to resolve the problems in their lives,” he said.

Party reform and gaining public trust, he said, should be prioritized over election strategy.

Ahn ran as an independent in the 2012 election but withdrew his bid at the final weeks of the campaign and threw his support behind Moon. He and his supporters later joined Moon’s Democratic Party to form the NPAD.

According to the reform measure announced Wednesday, anyone convicted by a court of law is barred from applying for nomination, even if the conviction is still being reviewed by an appeals court or if an applicant has been acquitted by a lower court.

The rule essentially prohibits any politician being prosecuted from running for a nomination.

By that standard, Rep. Park Jie-won, the NPAD’s former floor leader, won’t be able to seek nomination. Park was acquitted by a district court on charges of taking bribes, but later convicted in the high court. He is currently awaiting a Supreme Court decision.

Park was quick to criticize the new standard. “The party must not give the prosecution the right to nominate our candidates,” he said.

Kim added that abandoning the opposition to create a new party was akin to betrayal. “Anyone who publicly leaves the party to create a new one must be barred from returning, under any circumstances,” he said.

Earlier this year, Chun Jung-bae, a senior politician and former justice minister, left the NPAD to run as an independent in the April by-elections and won in Gwangju; he has plans to create a new political party.

Similarly, Rep. Park Joo-sun, a three-term lawmaker and head of the National Assembly’s Education, Culture, Sports and Tourism Committee, announced his decision Tuesday to leave the party to start his own.

Kim also lashed out at Rep. Cho Kyoung-tae for having undermined the party’s identity, insulting its members and instigating splits, and urged the NPAD to take punitive action.

Cho, a Moon critic who has demanded that the chairman step down, was the only lawmaker whose name was singled out during Kim’s press conference aside from the NPAD’s former and current leaders.

Cho contended that it was undemocratic for the committee to demand action against him for criticizing Moon. “I want to ask if the NPAD is Moon’s private property,” he said.