Itaewon murder suspect back in Korea

Itaewon murder suspect back in Korea 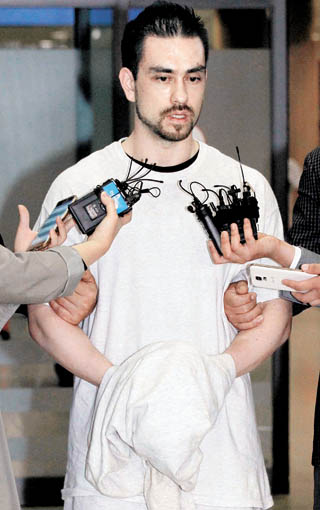 Arthur John Patterson, the key suspect in the so-called Itaewon homicide case, arrives at Incheon International Airport on Wednesday, 16 years after he fled to the United States. By Shin In-seop

The key suspect in the notorious Burger King murder in Itaewon in 1997 was returned to Korea on Wednesday after being extradited from the United States.

Arthur John Patterson, a 36-year-old American citizen, arrived at Incheon International Airport Wednesday morning in handcuffs and escorted by investigators, 16 years after he fled to the United States.

Patterson denied that he was responsible for the fatal stabbing of 22-year-old college student Cho Jung-pil on April 3, 1997, in a men’s room of a Burger King in Itaewon.

When asked who killed Cho, Patterson answered, “The same person I’ve always known as the killer.”

He was immediately taken to Seoul Detention Center.

The prosecution now believes Patterson killed Cho with a knife in the men’s room of the fast-food restaurant in Itaewon, the current site of an Olive Young store across the street from the Hamilton Hotel. Patterson was 18 at the time of the murder and the son of a U.S. Forces Korea civilian employee and a Korean mother. Cho was found dead after being stabbed nine times in his neck and chest.

But years ago, they thought the killer was 18-year-old Korean-American Edward Lee, who was studying in Seoul.

Patterson and Lee were together at the Burger King. The victim was apparently a stranger to the two men and was murdered randomly. Both said the other had done the stabbing.

Lee was convicted, but the Supreme Court quashed the decision in 1998 due to lack of evidence.

Patterson was also convicted of his charges and sentenced to 18 months in prison, although he was granted a special pardon on Liberation Day in 1998. In 1999, Patterson left Korea, taking advantage of the prosecution’s failure to extend a ban on him leaving the country.

It was after the success of the 2009 film “The Case of the Itaewon Homicide,” which prompted public outcry for punishment for the crime suspect, along with complaints from Cho’s family, that the Ministry of Justice reopened the case and requested Patterson’s extradition in 2010.

The statute of limitations for the case was set to expire in April 2012, 15 years after the murder, so the prosecutors took action to indict Patterson before the date came.

Prosecutors cited new evidence that they claimed could prove Patterson was actually the murderer.

They said bloodstain pattern analysis technology that was not available in the initial investigation had been used to analyze blood patterns at the scene of the crime. In addition, prosecutors gathered additional testimony implicating Patterson, including his alleged admission of the murder to a friend.

Patterson was arrested by U.S. authorities in May 2011, though he was able to delay his extradition to South Korea by submitting multiple habeas corpus petitions.

Prosecutors now have to prove the murder charge, and time is against them. The police officer in charge of the case, who would be a key witness, died in an accident.

One piece of evidence is a case report by the Crime Investigation Command of the U.S. Forces Korea, which conducted the initial investigation. It stated that Patterson was more likely the killer. The Supreme Court also pointed out that some of Patterson’s statements did not match the situation at the crime scene.

Cho’s family welcomed the fact that the suspect is back for a trial.

“We’ve prayed every day that Patterson is caught,” a relative of the victim said. “We are so relieved that the trial is to be held soon.”