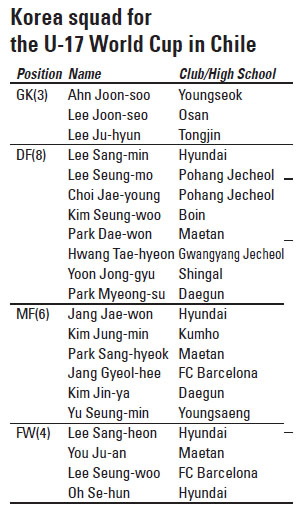 FC Barcelona’s Lee Seung-woo and Jang Gyeol-hee will be in the 2015 FIFA U-17 World Cup, as the Korea Football Association (KFA) announced its final squad for the upcoming football tournament in Chile.

On Thursday, the KFA unveiled the 21-man squad that will compete in the FIFA U-17 World Cup, which runs from Oct. 17 to Nov. 8 and includes 24 nations.

Forward Lee is currently with FC Barcelona’s second team, while midfielder Jang is with the Spanish club’s youth team Juvenil A.

After the squad’s runner-up finish last year in the Asian Football Confederation U-16 Championship, the KFA has buckled down, holding eight training camps in which 57 players have participated.

The KFA said that the team will train at the National Football Center in Paju, Gyeonggi, until Monday before heading to the United States for a friendly game with the U.S. U-17 team.

Korea will then enter Chile on Oct. 7 and have another friendly match with Paraguay on Oct. 10.

In the U-17 World Cup, Korea is in Group B along with Brazil, England and Guinea. The team first meets Brazil on Oct. 18 (Korean time), followed by Guinea on Oct. 21 and England on Oct. 24.

Coach Choi Jin-cheul said that the team could reach the quarterfinals.