Park set for new challenges off the pitch

Park set for new challenges off the pitch 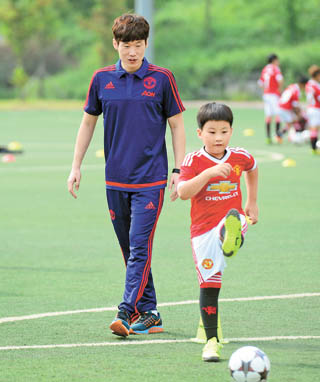 Manchester United team ambassador Park Ji-sung is smiling these days because of the performance of fellow Koreans in the English Premier League.

As the first Korean to play in the EPL, he was especially delighted to watch the performance of forward Son Heung-min. The former Bayer Leverkusen player has made a stellar start with Tottenham Hotspur after his debut goal in the EPL, which also gave the team its first victory of the season.

And while Son is grabbing the EPL spotlight, other Korean exports, Swansea City’s Ki Sung-yueng and Crystal Palace’s Lee Chung-young, are also basking in the renewed focus on Asian players.

Park is currently staying in London with his wife Kim Min-ji, who is expecting to give birth to their daughter in November. The former Manchester United and Queens Park Rangers midfielder has been busy since his retirement last May.

The 32-year-old is currently serving as Manchester United’s ambassador to promote the club while working as president of his JS Foundation. In July, Park was named as a member of the Asian Football Confederation’s Social Responsibility Committee.

In an interview with Ilgan Sports, an affiliate of the Korea JoongAng Daily, Park, who played more than 200 matches with Manchester United from 2005 to 2012, said he saw Son’s EPL debut goal on television and was as happy as if he had scored the goal. He offered some of his experience to Son.

Q. What did you think after watching Son’s debut goal?

A. This is a pretty good start for him. He should have some pressure to score his first goal in the EPL, but I think he has lessened that pressure and can [focus on] the rest of his matches. His debut goal will serve as a big contributor for the rest of his career.

Does this mean we can expect more from Son?

I think he earned his confidence with the goal. What’s important is how long he can maintain this good rhythm. He won’t be scoring in every match, but even if he hits a slump later, having a good start is helpful. I’m sure Son has already learned how to get out of the slump because he played in Germany for a long time.

There could have been an early Korean derby between Son and Crystal Palace’s Lee Chung-yong, but unfortunately it didn’t happen. What’s your take?

It would have been better if Lee came on to the pitch, but considering his team’s situation, it was difficult for Lee to play. But I’m sure he will overcome the situation. As the season goes on, there will be opportunities, and it’s important to take advantage of those chances. Then, we will see many Korean derbies later in the season.

Do you think playing in the EPL and fans’ high expectations will put more pressure on Korean players?

If you are a pro, you need to challenge those pressures wherever you go. As a player, you need to maintain your competitiveness to become a regular. For Son, I think he will get pressure because of his high transfer fee. There will be high expectations because he came for big money. But time will solve his tension and pressure.

Did you think about playing again after watching young Koreans on the pitch?

I haven’t thought about playing again. I have not kicked a ball since June when the Manchester United and Bayern Munich legend charity match was held. In the end of my playing career, my body was really not good, so I don’t think about playing football again. But in the future, I’m sure I will think about my memories.

Do you think Son can break your records in the EPL?

(Laughs) I think he can break all of the personal records that I have in the EPL. As a player who has more talent for attacking, Son has the ability to surpass me. He can probably perform better than me in his first season.

Son said he has never lifted a trophy yet, but you have won 13 trophies with United. Do you think that record is unbreakable?

I think unless Son moves to another club, that record will stay (laughs). Tottenham’s recent trophy was the league cup, so it’s not going to be easy. And winning the league is not easy wherever you go. I was lucky that
I played for a team like Manchester United.

Son said he wants to know how you maintained a consistent performance for big clubs like Manchester United for seven seasons. What’s the secret?

Showing consistent performance. I think that depends on a player’s position and style. There is no big difference between Son and my position in the past. But I think Son should have been ordered to play more aggressively to engage in offense. Considering the role and style, I think it was easier for me to remain consistent. Son, however, will have pressure to score a goal at every match.

Do you think Son will become like you and give dreams to younger footballers?

Of course. I also grew up by watching national team seniors. I liked Yoon Jung-hwan. [who is now coach of Ulsan Hyundai]. When I heard I was a role model for others, it felt strange, but it gave me motivation to perform and behave better. I think it’s natural to see more young players growing by watching Son’s performance.

Did Koreans in the EPL gather together?

Not yet. When I was in Korea, I heard those who played for London clubs gathered together. The problem for the meeting is Ki Sung-yueng because Swansea is far away from London. I have yet to have dinner with Son, but since he scored a goal, I think I should buy him dinner.

Ki said there is no Korean restaurant in Swansea. Did you know that?

London seems to have a good environment for Korean players because there are lot of places where you can eat Korean food. Living in Swansea, it will be difficult to experience Korean food. Since Ki has established himself with his club, I’m sure there will be no problem playing football. What’s left is whether he is thinking about going to a big club or not in the future. There should be a big club that wants him in the right position and, of course, the transfer fee has to be right.

Do you agree that the language is important to survive here?

There is big difference if you can speak the language. You can be friendly with your teammates if you can communicate with them. This leads to a good relationship on the pitch as well. Ki is already used to speaking English, while Lee is speaking well since he has been living here for a while. I was surprised by Son’s interview because I thought he could only speak German well, but his English was also good.

You’ve seen FC Barcelona’s Lee Seung-woo in the JS Cup. Do you think he has the ability to become the next Korean star in Europe?

After watching him in the JS Cup, I realized why he is regarded as a talented player in Europe. I can tell from his style and behavior that he learned football in Europe. He has the style which isn’t normally seen in Korea. But it’s his duty to develop that talent. Lee’s presence will influence other players in terms of developing skills.

What do you think about Ki becoming a father earlier than you?

First, congratulations to him because it’s an opportunity for him to get another motivation and grow up better. At the same time, I feel a little sad about him because he is not in a situation to stay longer with his family. I didn’t know this until I got married. Most players in Europe are in a situation [that forces them] to be away from their family. Sometimes I feel fortunate that I got married after my retirement.

Then what do you think is the right time to get married?

I don’t think you have to wait until after retirement. I know better than anyone else that living alone overseas is difficult. Having a stable married life is also important to playing football.

In London, are you focused on studying?

That’s what I should do. I need good preparation. I haven’t decided on the specific work I should do, but since I’m interested in football administration, I’m sure I will find things to do after I study in a related area. I think it will take about 10 years from now for me to move on to the next stage of my life. I don’t want to rush. I want to study the right way.

If you compare the challenge of moving to a new field and the pressure of a match, which gives you more nerves?

Actually, both have a different type of tension. Football is something I’ve done for most of my life and because of that, it’s a matter of showing how much I know. With Manchester United, I didn’t play every match, so I had some tension because if I don’t show something when I have the opportunity, I might not be playing in the next match. Right now, I’m entering an area I know nothing about. When I was young, I played football because I liked it, but as I became older, I took in experiences and knowledge which bring me fear.

Does this mean you will be a multi-role player, like you were on the pitch?

Probably. Now, I’m working for my foundation and youth football, and in the future, I will do administration work which will take me to different areas. But I do have a fear. I may think about whether I’m heading in the right direction and worry if I can really get the work I really want to do.