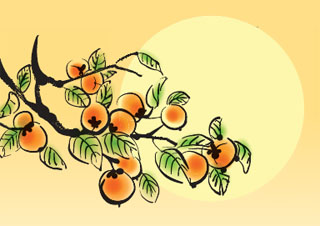 The Chuseok (harvest festival) holiday is a great opportunity for Korean residents to pay a visit to a nearby theater and watch a film or two.

It is a chance to catch up on the summer blockbusters you’ve missed and also to check out a brand new selection of films released for the fall.

This year, the Chuseok box office includes a range of Korean films that are not necessarily big-budget, but that have well-conceived, compelling plot lines, competent actors and not to mention a dose of wit that makes them good candidates for a family movie night.

The foreign films slated to arrive in theaters this holiday are not disappointing either.

From this year’s Venice International Film Festival opener “Everest” to the feel-good comedy “The Intern,” there is something for everyone.

So for those who plan to stay home during the long holiday weekend, which starts Saturday and lasts until Monday, the Korea JoongAng Daily has compiled a list of box office options.

Anne Hathaway is always a guaranteed crowd-pleaser. And her newest movie “The Intern,” in which she plays a young, bright CEO of an e-commerce start-up, is no exception to this rule. 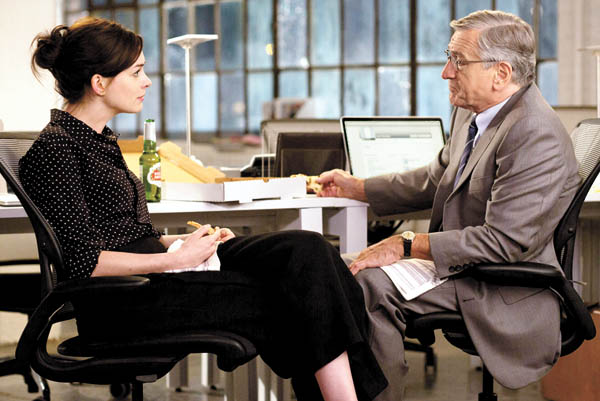 With strong passion as well as business savvy, Hathaway’s character Jules, a working mom, developed a 20-person team into a company that provides jobs for more than 200 people in just 18 months, and it keeps growing.

Meanwhile, there is Ben, played by Robert De Niro, who refuses the idea of retirement and applies for a “senior internship” program at Jules’ company at the age of 70.

Having been a devoted office worker for the past 40 years, Ben knows his way around a workplace, and his laid-back, warm personality makes him instantly liked.

Jules disapproves of Ben at first, but with things getting tougher for her both at work and home, she starts to open up to Ben. Don’t worry about getting uncomfortable because their relationship is nowhere near a romantic one.

This feel-good comedy is directed by acclaimed director Nancy Meyers, who has always shown keen interest in the lives and emotions of women.In this vein, “The Intern” is a successful piece representing the struggles of working women.

If you want an extreme IMAX cinema experience, check out “Everest.”

It is, hands down, one of the most meticulously customized films for the IMAX screen, taking the audience on an arduous yet thrilling snow-filled journey to the top of the world’s highest mountain, which rises 8,848 meters (29,029 feet) above sea level.

With the production team filming part of the movie on Everest and in the Alps, the film captures sublime beauty of the snowy mountain terrain. At the same time, it shows how merciless mother nature can be.

Based on a deadly incident that happened back in 1996, the film kicks off with two commercial expedition teams taking on the life-and-death challenge of conquering Mount Everest.

Feeling exhilarated each time they overcome a challenge, the team continues climbing for days. But as they approach the mountain’s peak, a massive and unexpected snowstorm awaits them.

There is no film like a splashy action to captivate the attention of young adult viewers.

In that sense, “Maze Runner: The Scorch Trials,” which resumes the series on a bigger scale and with more thrills, is an apt choice for both parents with children and teenage viewers.

The second installment of the eponymous trilogy of novels written by James Dashner picks up right where the first film, which was released in 2014, left off. A group of teenagers including Thomas (Dylan O’Brien), Newt (Thomas Brodie-Sangster) and Min-ho (Lee Ki-hong) escape the deadly maze set up by an evil force that calls itself WCKD (World Catastrophe Killzone Department).

But just when they think they are safe, the young group finds itself in an even more dangerous situation trapped in a place called the Scorch. To make things worse and more gripping, there are deadly creatures similar to zombies who pursue the youth wherever they go.

As to depict the apocalyptic dystopian setting characterized with endless desert, the film implements some stunning CGI scenes.

Since it opened in Korea on Sept. 16, the movie hasn’t let go of the No. 1 spot among foreign films.


This art-house film is the most low-key option at the cinema. Directed by the internationally acclaimed auteur Hong Sang-soo, “Right Now, Wrong Then” exudes his signature serene ambience backed by long, intimate conversations blooming between the two protagonists over glasses of soju. This time, it also includes makgeolli (rice wine). 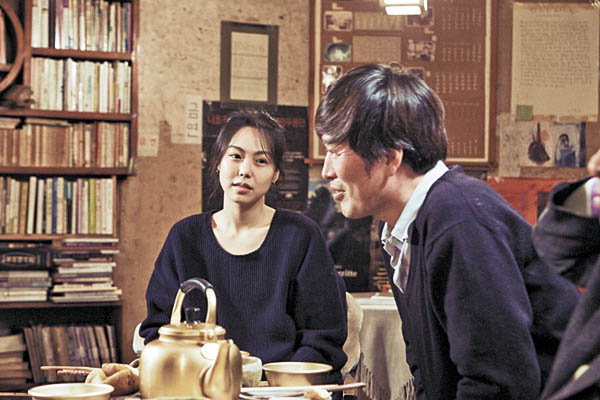 While most of his trademark style is maintained, his 17th feature-length film is divided into two halves. It seems they are two identical pieces knitted together, but upon closer inspection, there are a lot of changes in detail.

Because of the accumulation of these changes, the endings of the two halves - how the relationship between film director Ham Choon-su (Jung Jae-young) and Yoon Hee-jung (Kim Min-hee) turns out - are vastly different.

Hong recently said that the second half can be interpreted as repentance for the first half, saying, “If I show specific situation in two ways so the audience can compare the two, I thought it would make them think more, and use what’s obtained in the film in their real lives more easily.”

Having the 1950-53 Korean War as the backdrop, this war movie diverges from the usual blood-splattering, heroic movie, leaning more toward a heartwarming comedy drama.

It still brings tears to viewers’ eyes, but in a different way. Instead of evoking emotion from the heartless killing of countless soldiers, this film focuses more on family, especially brotherhood. 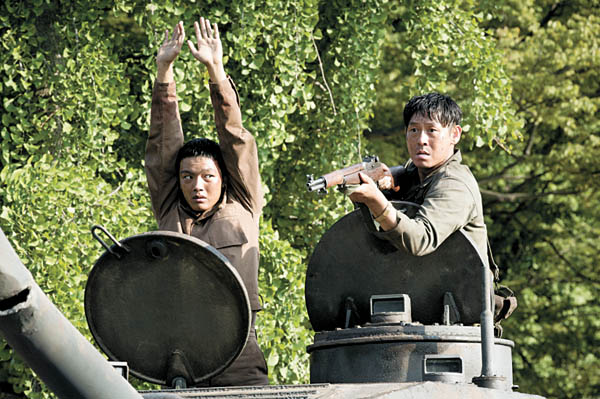 The film kicks off with Nam-bok (Sul Kyung-gu), who used to be a farmer in South Korea, accidently being given a mission to manage a highly confidential document. On the battlefield, he comes across the young North Korean soldier Yeong-gwang (Yeo Jin-gu), who is a tank operator but doesn’t even know how to drive.

Although first meet as foes, they form an unlikely friendship as they struggle to return to their homes.

The movie was directed by Cheon Sung-il, who penned the screenplays for box office hits like “The Pirates” (2014) and “My Girlfriend Is an Agent” (2008).

This film chases two hares at once and succeeds. It is both a comedy and a palm-sweating thriller all at once.

The comedy factor is to be expected with Sung Dong-il playing a serious-looking detective, Tae-soo, who reluctantly pairs up with Dae-man (Kwon Sang-soo) to solve the mysterious serial killing incident.

Dae-man, who gave up on his childhood dream of being a detective due to his knee problems, is a comic book rental shop owner who also takes care of his newborn baby while his wife is working. He is quite an ugly duckling at home, neither a competent breadwinner nor a perfect husband, but he is always trying.

In the latter part of the film, the action begins to take hold, unraveling the complex and entangled stories behind the deadly case at a lightning pace. The unexpected dose of thrill might even surprise the audience.

Director Kim Joung-hoon penned the screenplay, which won a local screenplay contest in 2006, beating out 588 other entrants.

Having been released last week, the earliest among its domestic rivals, “The Throne” is cautiously looking forward to winning this year’s Chuseok box office race. 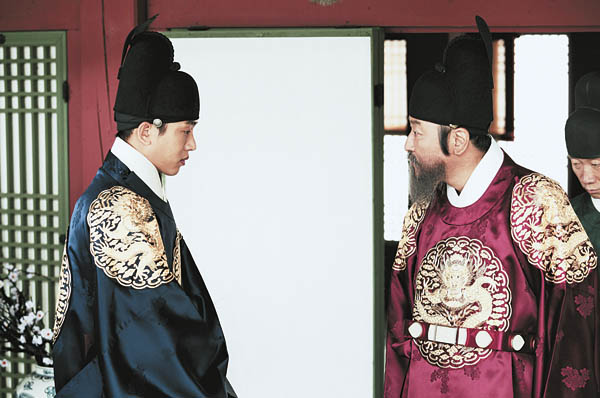 After selling more than 2 million tickets as of Tuesday, a week after its release, the period drama directed by Lee Joon-ik is firmly in first place in the local box office.

The film centers on King Yeongjo (Song Kang-ho) and his ill-fated son, Crown Prince Sado (Yoo Ah-i), who suffocated to death after his father locked him in a wooden rice chest for eight days.

As a ruler who cherishes legitimacy because of his own complex of being born in the lowest social strata, King Yeongjo has always had high standards for his son’s behavior that border on obsession.

So when the prince fails to live up to expectations, disappointment leads to hatred, resulting in conflict that can never be resolved.

The film also alludes to the theories that Prince Sado is to blame for his own tragic end.