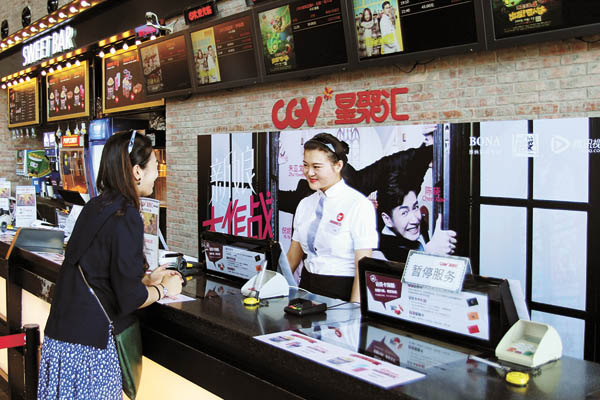 A customer buys ticket from CJ CGV theater in Qinghe, China, one of the 50 branches of the theater chain in China. Provided by CJ CGV

The new theater, equipped with 10 screens and 1,839 seats, is located in the city of Foshan in central Guangdong province, according to the company’s statement.

After recording its first quarterly surplus in the second quarter of this year, the company is planning to expand the number of branches in China to 80 by next year, the press release said.

Compared to its domestic business with 83 branches established since 1998, CJ CGV’s business in China is expected to expand at a fast pace.

Entgroup, China’s major film business media outlet, reported in May that the Korean theater chain is now the seventh-largest cinema chain in China.

The theater chain run by CJ Group, a major Korean conglomerate, considers its implementation of multiplex concept one of the biggest factors behind its successful foray into the Chinese market.

Building not only theaters, the company also introduced CJ-owned restaurants, bakeries and cafes at the venues. All 50 of the branches in China were built in the multiplex style, according to the company.

CJ CGV opened its first Chinese branch in Shanghai in 2006, becoming the first Korean theater chain in the country.

Over the next decade, it opened more in major cities like Bejing and Tianjin, building 401 screens in total.