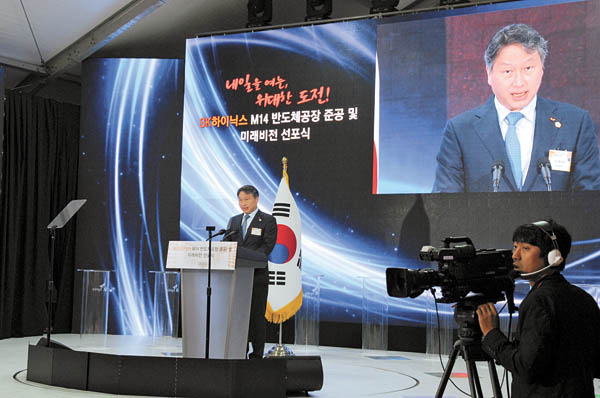 SK Group is promoting the government’s creative economy initiative by focusing on information and communications technology (ICT) as its future growth engine.

In November, the group created their own division within the center, composed of the group’s employees, to plan mentoring sessions, investments and assistance in overseas expansion for young entrepreneurs specializing in technology and science.

SK also runs a center in Sejong City that is currently focusing on so-called smart farming, which aims to increase and stabilize income for farming households by integrating ICT with farming techniques. Many of the new technologies allow for farming conditions to be controlled through smartphones.

SK C&C is taking the lead in the ICT service sector. SK C&C has been joining forces with other companies to improve customer experience. Last July, they signed a partnership agreement with IBM Korea to collaborate in the cloud business.

The two will jointly develop cloud programs for offices that can be easily tailored to different industries according to each corporate client’s needs.

Last June, SK C&C announced a plan to develop an IT service model for Internet-only banks. For this project, SK C&C set up a special team comprised of IT experts in areas from mobile banking to big data. The team’s first task will be finalizing the development of the platform, which it has been working on since last year.

SK Hynix, a leading semiconductor producer, is backing up the ICT initiative through manufacturing. SK Hynix’s main focus is on R&D in processing technology.

SK Hynix currently ranks second in the global DRAM market. DRAM is a kind of memory used in a wide range of IT products and personal devices such as desktops, laptops and smartphones. The company’s most recent technological breakthrough was the development of 20-nanometer processing technology for DRAM, which few competitors have been able to duplicate.