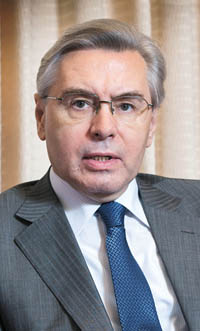 Russian Ambassador Alexander Timonin said Moscow is concerned about a possible long-range missile launch by North Korea, but he also emphasized that as a sovereign nation, Pyongyang has a right to peaceful space development.

The top Russian envoy to Seoul also underscored that his country is strongly opposed to a three-way anti-missile defense system among Washington, Seoul and Tokyo under the pretext that it is a defense against North Korea - and said such a move
could prompt a countermeasure from Moscow.

“Russia does not recognize North Korea as a nuclear state,” Timonin told the Korea JoongAng Daily and the JoongAng Ilbo on Wednesday. “At the same time, we believe that the DPRK [Democratic People’s Republic of Korea] as a sovereign state and a member of the United Nations has the right to peaceful space development. But this right has to be exercised under the regulations of the UN Security Council and under the conditions of it returning to the Nonproliferation Treaty and International Atomic Energy Agency [IAEA].”

The ambassador conducted an hour-long interview in Russian at the embassy in central Seoul ahead of the 25th anniversary of the establishment of bilateral ties between South Korea and Russia.

“We established bilateral relations on Sept. 30, 1990, a considerable revision to Russia’s policy toward the Asia-Pacific region and one of the symbols of the end of the Cold War era,” he recalled.

A key area of cooperation between Seoul and Moscow is North Korea.

“I can’t speculate on something that has not happened yet,” Timonin said regarding concerns that North Korea may test a nuclear device and launch a satellite into space to mark its Workers’ Party anniversary next month. “But I want to emphasize that Russia is paying attention to the preparation of a launch of a satellite and the operation of the Yongbyon nuclear facility in North Korea.

“I would like to point out that in the most recent years, because of the crisis in Northern African and Middle Eastern countries, North Korea’s mistrust of the security regime under international law has grown,” said Timonin, who previously served as ambassador to Pyongyang. “And North Korea’s perception that only weapons of mass destruction can guarantee the protection of its country has only been enforced.”

However, he added, “Russia does not justify Pyongyang’s nuclear and missile program” and said the root of the problem has to be tackled.

“Military actions and sanctions have to be abandoned, and dialogue between the Koreas has to be adequately restored in order to alleviate the tension on the Korean Peninsula and for inter-Korean cooperation to prosper,” he continued.

Timonin also addressed Russia’s concern over the possible deployment of the U.S.-led Terminal High Altitude Area Defense (Thaad) system in Northeast Asia, with Washington in partnership with Seoul and Tokyo.

“Russia, as we have told our South Korean partners several times, said that we cannot allow the United States’ efforts to use North Korea’s nuclear and missile program as a pretext to build a new defense system in Northeast Asia and enable unilateral military dominance,” he said. “We believe a comprehensive missile defense system among South Korea, the United States and Japan, in terms of technical capacity, far exceeds the level of what is needed to counter any potential missile capabilities possessed by North Korea.”

“We express once more our concern over the deployment of the U.S. Thaad to Korea,” a position that is also shared by the Chinese leadership, he said. Such a deployment would “complicate the situation in Northeast Asia.”

That message was reiterated in a high-level bilateral security dialogue, held Monday in Seoul and attended by Secretary of the Security Council of Russia Nikolai Patrushev and Korean officials including Kim Kwan-jin, President Park Geun-hye’s chief security aide. Security, stability on the Korean Peninsula and resuming the six-party talks were other key issues discussed.

“The secretary especially emphasized that Russia cannot accept the deployment of Thaad on the Korean Peninsula and the establishment of an integrated MD [missile defense] system among the United States, Japan and South Korea,” Timonin said. “Such a system is not needed, and the currently existing issues can be solved through political and diplomatic means.

“At the same time,” he warned, “if an MD system that includes the borders of Russia is built, Moscow will inevitably have to respond accordingly to preserve its security. But we hope such a situation will not happen.”

South Korean and Russian cooperation “is an important part of seeking a way to resolve the nuclear problem on the Korean Peninsula,” Timonin also said, particularly through the framework of the long-stalled six-party talks.

He recalled that the Sept. 19, 2005, joint statement signed in the fourth six-party talks in Beijing between China, Japan, Russia, the United States and the two Koreas recently marked its 10th anniversary.

“I want to emphasize as someone who personally participated in the preparation of the statement that the joint statement says not only that North Korea has to abandon all its nuclear programs and return to the Nonproliferation Treaty and restore IAEA safeguards, but also that the United States should not have any hostile intentions toward North Korea and be prepared to improve relations,” said Timonin, who is fluent in Korean. He has spent 35 years in diplomacy and 25 years dedicated to Korean issues.

He said the agreement allows North Korea the peaceful use of nuclear energy and, at an appropriate time, the provision of a light water reactor.

Despite the ending of denuclearization talks since Pyongyang walked out in 2009, Timonin said, “Russia believes the six-party talks are the most appropriate structure to gather all related parties and discuss nuclear issues.

“I believe that all parties that support peace and stability on the Korean Peninsula need to exercise restraint and responsibility and cease military displays through sincere dialogue based on mutual respect and trust to alleviate tension,” he said.

Timonin is the first ambassador to be transferred to Seoul from Pyongyang, where he served from May 2012 to January 2015.

On the bilateral relations between South Korea and Russia, he said, “In 1990, we started nearly at a zero point, but since then, we made such symbolic, impressive progress. We have built new economic, science and
cultural systems, and regular contact between our leadership became
customary.”

Since 1990, the leaders of the two countries have officially met 27 times, including President Vladimir Putin’s visit to Seoul in 2013. He added that the two countries’ annual bilateral trade exceeded $26 billion.

He pointed out that on top of trade and economic benefits, “Korea-Russia cooperation has come to play an important role in resolving international political issues.

“Today, there is no area that our two countries do not cooperate in, whether it is international security, trade, economy, politics, culture, science and technology or energy.”