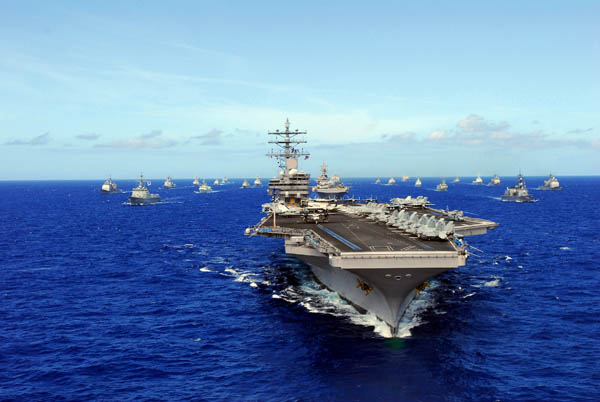 The aircraft carrier USS Ronald Reagan is shown in a file photo.[Courtesy of U.S. Navy]

The USS Ronald Reagan, one of the most modern supercarriers of the U.S. Navy, has started operations in waters near the Korean Peninsula.

According to the U.S. Navy, the area of operations includes 36 maritime countries and the home nations of some of the world’s largest armed forces: China, Russia, India, North Korea and South Korea. The area is home to five out of seven nations with which the U.S. has mutual defense treaties: the Philippines, Australia and New Zealand, South Korea, Japan, and Thailand, it said.

Until now, the U.S. Navy deployed the USS George Washington to operate in the region. The Ronald Reagan will replace it, a South Korean Navy official said.

“The George Washington, commissioned in 1992 and operated for the 7th Fleet, went back to the United States in May to refuel its nuclear fuels and upgrade equipment,” the official said. “The Ronald Reagan was deployed to replace it.”

According to the source, the upgrade of the George Washington will take about three years.

An aircraft carrier carries about 80 fighter jets. Because a carrier strike group includes a carrier, at least one cruiser, a squadron of at least two destroyers and occasionally submarines, their capabilities combined are sometimes as strong as a small nation’s entire naval and air forces.

“An aircraft carrier, just by its presence, is an enormous threat to the rival country,” said Shin In-kyun, a security expert who runs the Korea Defense Network. “Replacing the George Washington with the more advanced Ronald Reagan shows the U.S. strategy to strengthen its naval power in the region.”

He said the move is intended to check China’s rising military presence and deter attacks or other provocations by North Korea.

While Beijing and Pyongyang have complained about the U.S. supercarrier’s maneuver near their shores, Washington and Seoul have used it to send a warning message.

In 2010, the George Washington was sent to participate in a joint military exercise between the South and the United States in the Yellow Sea in the wake of the North’s shelling of Yeonpyeong Island. Earlier that year, the aircraft carrier participated in a drill in the East Sea to rebuke the North for its sinking of a South Korean warship, the Cheonan.

That show of force was protested by China and North Korea, and China responded with its largest-ever missile firing exercise near the Yellow Sea.

The U.S. Navy operates 10 Nimitz-class nuclear-powered supercarriers. The George Washington is the sixth of them and the Ronald Reagan, commissioned in 2003, is the ninth ship of her class.

The two aircrafts may appear similar, but the Ronald Reagan is far more advanced than its predecessor.

The main operational difference is an additional runway that allows fighter jets to take off and land at the same time. It also has more advanced radar and is capable of operating in higher waves.

“The Ronald Reagan is one of the most modern aircraft carriers. The technology Ronald Regan is bringing to 7th Fleet is an example of the U.S.’s commitment to the region and the progress of bringing the newest equipment to operate with the forward deployed naval forces,” the U.S. Navy said.

“The United States assigned all the crew from the George Washington to board the Ronald Reagan to improve operational effectiveness in the region,” Shin said.