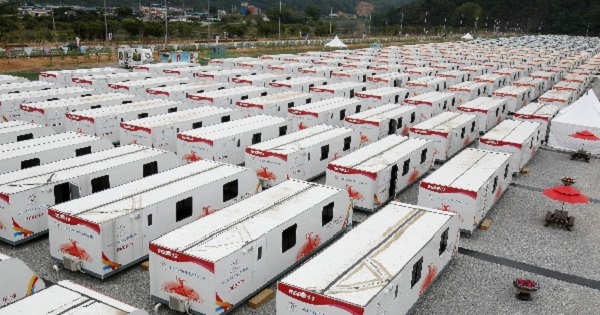 Trailers in the athlete’s village for the 6th CISM World Games in Mungyeong, North Gyeongsang, sit in near rows. The international military sports event kicks off Oct. 2. By Kong Jung-sik

A small city in North Gyeongsang will host an international event next week, thanks in part to the surprisingly innovative solution it came up with to solve the issue of accommodation.

But in February, the city government, the host of the event, couldn’t even begin to prepare lodging for the competition’s 1,300 participants with just eight months before the event. 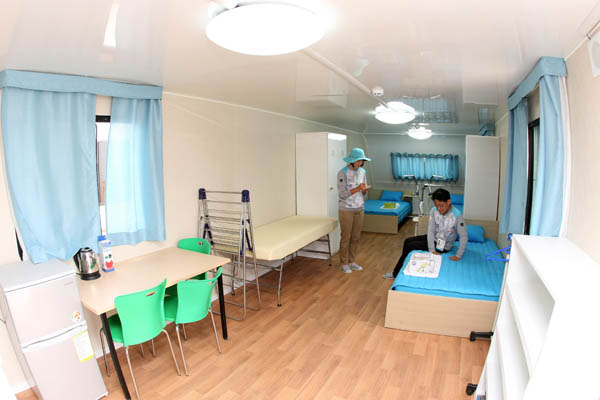 An interior view of the travel trailer. By Kong Jung-sik

At first, officials suggested constructing a new apartment building whose units could then be sold to residents once the games were finished.

Still, the plan would need an initial 80 billion won, and no construction company was willing to sign on. Given Mungyeong’s population of 70,000, it was unlikely the apartments would sell.

Others suggested building an athlete’s village with container units, but the idea was nixed over concerns that it would resemble a refugee town.

Then city officials posited: What about recreational vehicles (RVs)?

Utilizing campers would drastically reduce expenditures, and because it was an unprecedented suggestion, the only issue left standing was whether the CISM would accept the plan.

The council later answered that it would accept the proposal it if the city could provide a certain extent of space per athlete.

So the city government decided to build the campers equipped with beds, a bathroom and a shower that could accommodate four people each within 36 square feet (43 square yards).

In April, the Mungyeong government held a contest and selected Doosung Motor Company’s bid to offer the campers.

Doosung built the trailers for 26.5 million won each and lent them for the event for 10 million won a piece.

CISM welcomed the RV park, praising the quality of the village after inspection.

It also turned out to be significantly cheaper than the other idea: The city government paid just 3.5 billion won for the athlete’s village, renting out 350 campers.

In fact, the plan was also so appealing that the organizing committee for the 2018 Pyeongchang Olympic Games toured the village for review.

“We are planning to hold the most successful World Games,” North Gyeongsang Governor Kim Kwan-yong said, “while at the same time trying to save some of our budget on accommodations and other areas.”