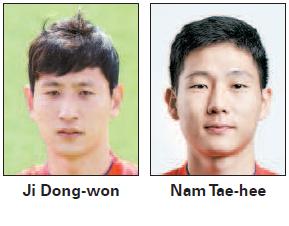 FC Augsburg striker Ji Dong-won is back with the national football team for the first time since March, as Korea unveiled its 23-man squad for the upcoming FIFA World Cup regional qualifier against Kuwait and a friendly match against Jamaica next month.

The Korea Football Association announced on Tuesday the squad for the 2018 FIFA World Cup second round Asian qualifiers against Kuwait that will be held in Kuwait City on Oct. 8, as well as the friendly match against Jamaica in Seoul on Oct. 13.

The match against Kuwait is critical for Korea. Both countries have three wins in Group G for their World Cup qualifiers, although Korea tops the standing in goal difference.

“Kuwait is currently the strongest opponent in our group,” said Korea national team coach Uli Stielike. “We should prepare better than what we did against Lebanon.” 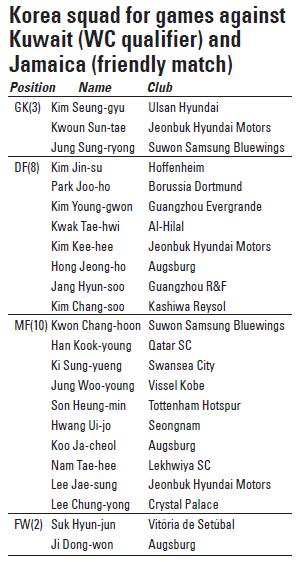 Stielike changed out five players from the squad that played Laos and Lebanon in two World Cup qualifiers in early September. Goalkeeper Kim Dong-jun, defenders Rim Chang-woo and Hong-chul, and midfielders Kim Min-woo and Kim Seung-dae are out, but familiar faces like goalkeeper Jung Sung-ryong, defender Kim Chang-soo, midfielders Han Kook-young and Nam Tae-hee and forward Ji Dong-won are back on the squad.

Among them, Ji is wearing the national team uniform for the first time since March when the 24-year-old striker played in friendlies against Uzbekistan and New Zealand.

Since Stielike’s regular pick Lee Jeong-hyeop is out with an injury, Ji, who plays for German club FC Augsburg, will have to compete against Suk Hyun-jun for main striker. Suk, who played in the latest World Cup qualifiers and scored his national team debut goal against Laos, is currently performing well in Portuguese club Vitoria de Setubal, scoring five goals and getting four assists in six matches.

However, Ulsan Hyundai striker Kim Shin-wook, who is currently the lead scorer in the K-League Classic with 14 goals in 32 matches, didn’t make the list.

“I have considered a lot between Kim Shin-wook and Ji Dong-won,” Stielike said. “But I will summon Ji again this time and check him closely. He has been increasing his playing time with Augsburg recently.”

Along with Ji, two midfielders who are based in Qatar are also back. Attacking midfielder Nam Tae-hee and defensive midfielder Han Kook-young are with the Taegeuk Warriors for the first time since June.

Stielike said the two players were not summoned for Korea’s previous showdowns, not because they lack talent, but because they were not in fit condition to play. The 60-year-old German added that competition for a spot on the national team is normal.

To ensure victory, Stielike also summoned Europe-based players, including Tottenham Hotspur forward Son Heung-min, who has been playing well in the English Premier League. Stielike said he will use the former Bayer Leverkusen player on the flanks, although Son plays in the center with his English club.

Kwon Chang-hoon, who rose as a Cinderella after his impressive performance in previous qualifiers, is also on the squad, although the 21-year-old was originally with the Korea Olympic football team.

Stielike said he and Olympic football team coach Shin Tae-yong agreed to place Kwon on the senior national team in October, since the World Cup qualifiers are important. The Suwon Samsung Bluewings midfielder, however, can join the Olympic team for its friendly matches in November.

The KFA said K-League players will be summoned to Incheon International Airport on Oct. 5 to leave for Kuwait.