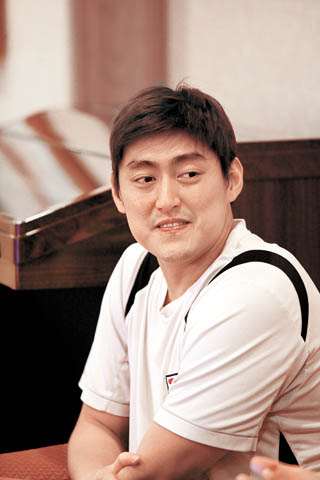 Setter Yu Kwang-woo joined the Bluefangs in 2008, but because of a chronic ankle injury, the Inha University graduate was sidelined for two seasons. He finally became a regular setter for the team beginning in the 2010-11 season and played a pivotal role in winning championship titles.

But the 30-year-old’s last season saw his club give up the championship title for the first time since the 2006-07 season, and to reclaim the trophy, Yu and the Bluefangs have been sweating hard in Shizuoka, Japan, since Sept. 17. The team returned to Korea last Thursday to prepare for the new V-League season that begins Oct. 10.

While he is a Bluefangs veteran, Yu has been out of the spotlight as foreign attackers and coach Shin Chi-young have been regarded as the main stars. However, in an interview with Ilgan Sports, an affiliate of the Korea Joong
Ang Daily, the three-time V-League best setter says he prefers to play a supporting role.

Q. People say you are tough on the court. What do you think?

A. Yes, I do push players. If captain Ko Hee-jin cares about players in general, I’m more of the guy who pushes and picks on players. For instance, if there’s a mistake during the game, I shout at players to get our minds straight and focus. I especially hate losing games.

In recent years, a lot of players have come from other teams. Since our unique team culture shouldn’t be forgotten, I try to emphasize team tradition and culture. I think this should be carried out by veterans.

What do you think about last season’s defeat in the championship?

It was really difficult to accept, but on the other hand, we would have experienced that bitterness someday. I think we have been thinking that the championship trophy will automatically follow if we can just reach the final round. I think last season’s defeat served as an opportunity to remind players of their responsibility. In the past, we were always the champions, but now we are the challenger, so I think we can start this season with a comfortable mindset.

Was there pressure to win the championship?

We always had to defend the title. Many people were obviously thinking that we were going to win the championship, but now I think that pressure is relieved. But this is the critical time. If we can make it to the top with existing players, I think we can develop more. So it’s going to be very important season.

Last season, you were close to winning regular season MVP, but your teammate Leonardo Leyva Martinez won the award for the third consecutive year. So far, no setter has won MVP. What do you think?

For the last four seasons, you were No. 1 in setting, which ties the record of Choi Tae-woong (now the Cheonan Hyundai Capital Skywalkers coach). Do you think you can break the record?

Being the top player in a certain title is always coveted as a player. But now, instead of my personal interest, I have to focus on my team to win the championship. I think my personal performance will then follow.

How do you define your set style?

I’m a setter who tries to give the attacker an easy and comfortable spike. Although I’m not fancy, I try to set up the attacker to hit the ball in his style with confidence.

What makes the setter position attractive?

I first played as a right attacker but switched to setter when I was [in the last year] of middle school. People say deceiving the opponent is the ecstasy of playing setter, but there is another type of excitement when an attacker gets to score from my toss.

Is it true that you take painkillers every week before a match because of a chronic ankle injury?

Now it’s my daily life. I have to bear it until I retire. But if I think too much about it, I will be weakened.

Chief assistant Im Do-hun became the new head coach for this season. What can you say about him?

He gives orders very delicately. Since he can give directions quickly after watching the opponent, I think he is very good. Players can also understand his orders easily and absorb his style.

Obviously, winning the championship. We will do it step by step. What’s important is to build ourselves up from inside and go straight to our goal.