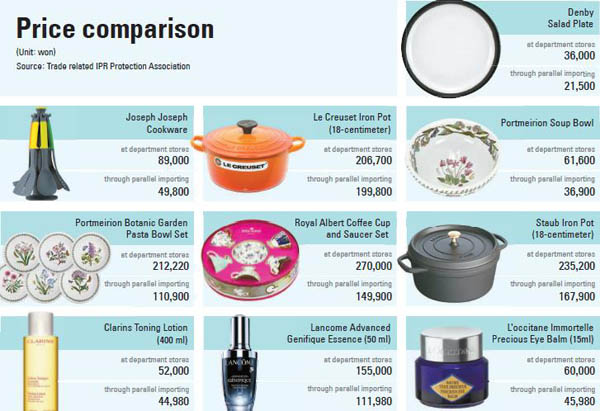 More consumers are buying luxury goods brought into the country through “parallel importing” and taking the risk of purchasing counterfeit products to get the benefit of cheaper deals, government data shows.

Parallel importing is a legal way to import products into Korea mostly through small online traders. Although prices are normally cheaper than department stores, many items have been found to be fake.

Consumers can end up paying expensive delivery charges with long delivery times after they have paid for items.

Despite the risks and inconvenience, more Koreans are turning to parallel importers for better prices on foreign goods. 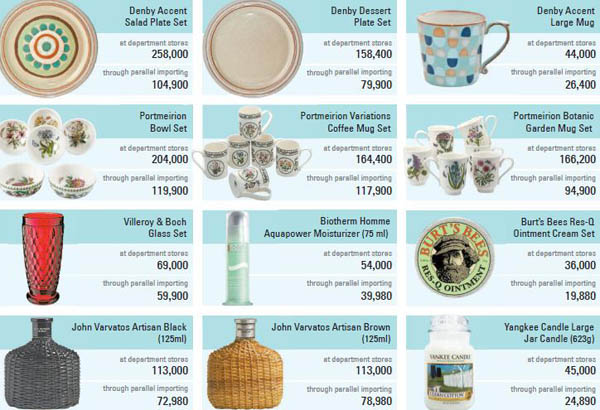 The state-run Korean Customs Service’s Trade related IPR Protection Association (TIPA) has carried out the first-ever comparison of the price of products imported through the two different systems - parallel importing and direct import to department stores - between July 31 to Aug. 27 and provided the data to JoongAng Ilbo exclusively.

The report said the products sold at the department stores were about 35 percent more expensive than the same items sold by parallel importers on average.

The average price of a Denby four-bowl set at the department stores was nearly 60 percent higher than the same set sold by the parallel importers.

Cosmetics at the department stores were also about 24 percent more expensive on average than those imported by parallel traders.

Korea authorized parallel imports about 20 years ago in an effort to remove the “bubble” in the prices of luxury foreign brands that were exclusively sold at department stores.

Despite the price difference, most Korean consumers still buy luxury brands from department stores due to doubts about authenticity.

Korea’s parallel importing market has been criticized for carrying counterfeit products and many department stores making efforts to curb their rise in the market.

Imports through parallel traders amounts to 2 trillion won annually and 30 percent of traders are small individual merchants who buy the products in foreign countries in person or have a network with local merchants abroad.

Japan, which lifted regulations on parallel importing 30 years earlier than Korea, imports nearly 40 percent of all foreign goods through the parallel channel.

Korea Custom Service has established an authorization system to inspect the authenticity of all foreign products brought through parallel importing.

If they are found to be original, a sticker is attached to the package with a QR code, which can be used to give the consumer detailed information on the product.

A new organization has also been launched to change Korean’s negative perception of parallel importing. Gong Byeong-ju, the president of the Korea Parallel Importers Association, said he founded the body to “boost the competitiveness of nearly 1,000 parallel importers.”

Most online parallel importers are small companies with less than 5 employees and it is difficult for consumers to check whether the products are fake or not. Officials believe the QR code will help verify the authenticity of goods.

Recently, a string of services providers, hypermarkets and online shopping malls have joined the parallel importing business, leading to a drop in prices of products at department stores.

“Although the number of products brought by parallel importing is increasing, many consumers are still hesitating to buy due to the doubt over authenticity,” said an official at TIPA. “It is not true that all of the parallel imports are counterfeit, we encourage consumers to purchase through the channel at reasonable prices.”

Expensive products, such as luxury branded hand bags, may not be a good buy as their prices fluctuate according to currency exchange rates.