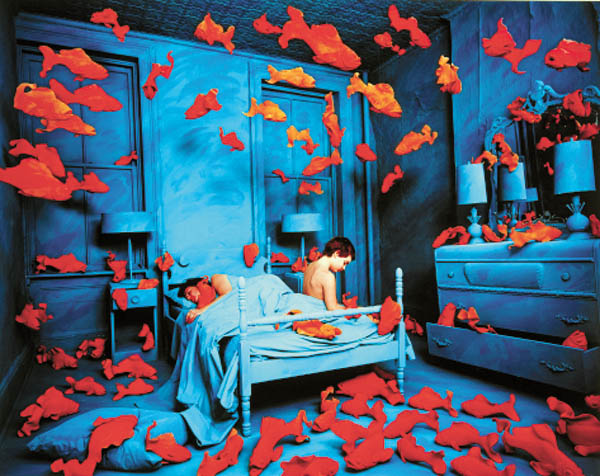 To Oct. 23: The exhibition, as the title implies, studies colors with works not only by contemporary artists interested in the cognition of color but also design and communication laboratories.

Among the works is an interactive media art piece by artist duo Hybe, which coverts colors into sounds played by a digital piano. The exhibit also includes Surrealist works with strong colors created by American artist Sandy Skoglund and French artist Bernard Faucon, who create elaborate sets and take photos of them.

To Oct. 11: The exhibition showcases 270 pieces by 110 artists, selected by the National Museum of Modern and Contemporary Art (MMCA) to examine Korea’s history since its 1945 liberation from Japanese colonialism. The works are divided into three sections.

Section 1, “Uproarious,” focuses on the 1950-53 Korean War and life in postwar Korea, portrayed by the painters and photographers of the time such as Limb Eung-sik and postwar generation artists including Jeon Jun-ho.

Section 2, “Heated,” explores the nation’s rapid industrialization, urbanization and democratization in the 1960s to the ’80s.

Section 3, “Inundated,” examines Korean society since the 1990s, with its diverse values and hybridized culture through works by Bahc Yiso, Debbie Han, Hong Kyoung-tack and others.

To Oct. 11: As part of Hyundai Motor’s art patronage project, the annual multidisciplinary exhibition has featured hot contemporary artists, designers, architects and engineers. But this year’s edition starts with one of Kim Jeong-hui’s seoye (East Asian calligraphy) pieces to pay homage to the originality of the 17th-century scholar and seoye master. He was better known by his pen name Chusa. The other exhibits are by 10 contemporary artists and designers. They include paintings by contemporary seoye master and scholar Kim Jongweon and installation works by Lee Seung-taek, which are reminiscent of seoye strokes.

The fictional Cho is an unsuccessful actor who died alone in 1995 at the age of 81. The exhibition consists of the articles he left behind, an installation piece that reproduces the small rented room where he spent his final days, a video piece that portrays his daily life, and elaborate pencil drawings depicting scenes from the famous films he insisted he had appeared in. To further confuse visitors, the fictional actor Cho is portrayed by the 48-year-old real-life actor Jo Deok-hyun in the video and drawings, as the artist Cho asked him for collaboration.

The artist says he intends the exhibit to address not only the imperfection of an individual’s memories and that of history - the collection of such memories - but also the vague borders between fiction and history.

To Nov. 8: This solo exhibition showcases the works of painter Sunghun Kong.

For this exhibition, Kong has taken a very delicate subject, twilight, and ambitiously defies its transitory nature and paradoxically immortalizes the short interlude between day and night and vice versa, according to the gallery.

Viewers can enter the realm of this “magic hour” through the different angles of approach manifested in his vast compositional and color exploration and experimentation, the gallery says.

Admission is free. The gallery is closed on Mondays. Go to Anguk Station, line No. 3, exit 1, and walk for 10 minutes.

To Nov. 15: As a salute to the beginning of the second half of the year, the Gyeonggi Museum of Modern Art has prepared a set of three exhibitions: “Mountains, Rivers and People: Eight Views and Nine-Bend Streams of Gyeonggi,” “Rhythmscape” and “Color Pool,” all of which feature works of numerous Korean artists.