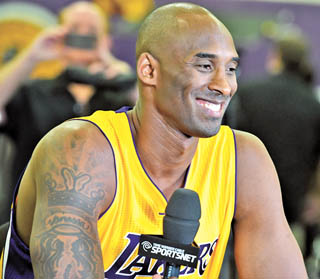 EL SEGUNDO, California - The third-leading scorer in NBA history had only the faintest smirk when he stood in front of the photographers in his gold jersey Monday and held up a white sign reading: “Kobe Bryant.’’

Even heading into his 20th season, Bryant isn’t exempted from the Los Angeles Lakers’ regular preseason rites like the media day that precedes the start of training camp. The little things don’t appear to bother Bryant as much as they might have when he was closer to championship parades than retirement parties.

But if the 37-year-old Bryant is beginning the final season of his incredible career this week, he insists he doesn’t know it.

Asked several ways by reporters from several continents, Bryant repeatedly said he hasn’t decided whether to retire next summer. He has thought about it extensively, and he even consulted with former New York Yankees star Derek Jeter about the best way to know when to hang it up.

Bryant understands sports well enough to know his future will be a hot topic this season. He’s ready for the speculation, but he can’t resolve it.

“People want to know when the time has come for you to hang them up,’’ he said. “Like me, don’t like me, they respect the career that I’ve had. I think that’s a pretty damn cool thing.’’

Bryant has accomplished nearly everything possible in an NBA career, but the five-time champion’s last three seasons have ended early due to injury. He has played only 41 games in the past two years - and none since tearing the rotator cuff in his right shoulder last January, his famously resilient body finally breaking down under heavy minutes and responsibilities.

Without him, the Lakers went 21-61 in the worst season in the club’s history. Los Angeles missed the playoffs in consecutive years for the first time since the 1970s, and few give them much of a chance to avoid the Lakers’ first three-year playoff drought ever.

Bryant still dreams of a sixth ring, and he laughed at former coach Phil Jackson’s speculation he could pursue that goal elsewhere next year when his lavish Lakers contract runs out.

“Everybody is going to have opinions, and I can’t comment on every single thing everybody [says], even if it’s a coach I’ve won so many championships with,’’ he said.

Bryant has more pressing responsibilities at home: He intends to mentor D’Angelo Russell, the No. 2 pick in this summer’s NBA draft. The 19-year-old point guard’s locker is next to his at Staples Center - and that’s totally by coach Byron Scott’s design.

The Lakers’ bounty of young talent still treats Bryant with a respect bordering on reverence, although that might change after they’ve been in a few workouts with him.

“I don’t know how much longer he’s going to be around, so I love to get the opportunity to pick his brain a bit every day,’’ Russell said.