Corporate espionage is on the rise at Korean firms

Corporate espionage is on the rise at Korean firms 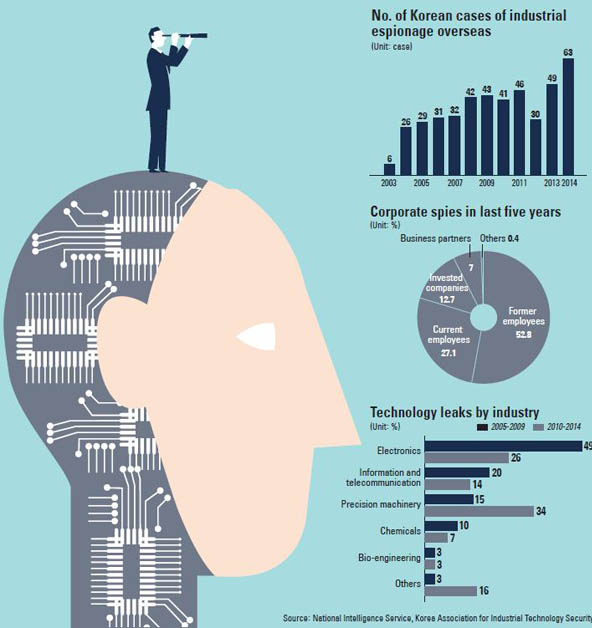 Mr. Cho, a 29-year-old who works for a business partner of Hyundai Motor, was dispatched in February to a Chinese company that was working on a new vehicle development project for the Chinese automotive company Beijing Automotive Industry Holdings (BAIH).

The blueprints were used in the development of BAIH’s new vehicles. Mr. Kim, a 34-year-old who was also dispatched to the Chinese company from a different business partner of Hyundai Motor, also secretly delivered blueprints for the company’s latest models, including the Sorento, i20, K5, Sportage and Mohavi.

The Seoul Prosecutors’ Office said earlier this month that it is taking legal action against 12 individuals, including Cho and Kim, for leaking vital information from Hyundai Motor.

The situation of industrial espionage is even more serious at small and midsize companies.

Shinseng Industrial is a company that makes the most durable tungsten carbide in the domestic market. The Korean SME reported 43.4 billion won ($36.3 million) in revenue in 2011. But last year, that figure shrunk 29 percent to 31 billion won.

Shinseng Industrial’s demise started when one of its executives quit and founded a new company that started manufacturing a similar product. The former executive hired some 30 key workers from Shinseng Industrial, and in the process illegally received 4,000 files that included key design blueprints.

In just four month since the former executive opened up shop, the company was rolling out a similar product, and in 2012, it earned 5.7 billion won. Last year, that revenue nearly doubled to 10.2 billion won.

Corporate espionage has been on the rise in recent years, largely because of the development of technologies and portable devices including smartphones, USB flash drives and even social network services. Such technologies have made it easy to copy and transfer vital information.

According to the police last year, there were 111 cases of corporate espionage in which vital company information was leaked. In 2010, there were only 40 cases.

In the last five years, the National Intelligence Service has encountered 229 cases where corporate spies have leaked Korean companies’ technology to overseas firms.

The damages that companies have suffered due to the losses are estimated at 50 trillion won, or 3 percent of the nation’s GDP.

Cracking down on corporate espionage isn’t easy for investigators, in part because companies that are victimized avoid filing reports with the authorities, fearing the news could impact their stock prices.

“There are numerous cases of small and midsize companies where the leak of corporate information and technologies goes unnoted because they don’t have the luxury of the separate digital security team that all conglomerates have,” said Kim Dong-geuk, head of the corporate technology espionage investigation team at the Seoul police. “It is also difficult to recover the digital data that the perpetrator later erased.”

“The profit that comes from leaking corporate secrets is much more significant than the punishment someone would face if they were caught, and that’s the reason why corporate espionage continues,” said Kim Min-bae, head of the Korea Association for Industrial Security. “Actions must be urgently taken, such as changing the related laws to be more practical or to train expert investigators.”