Aide to Saenuri leader defends likelihood of an open primary

Aide to Saenuri leader defends likelihood of an open primary 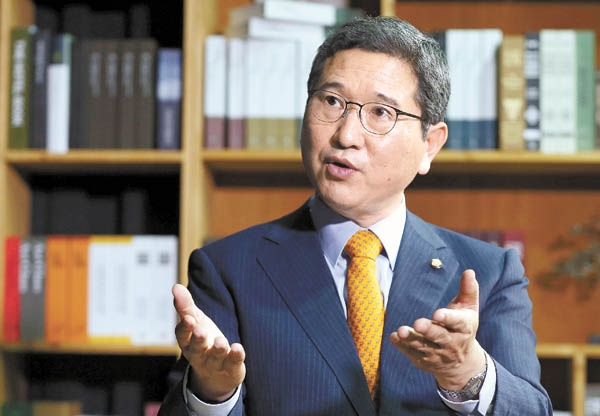 When the chairman was the floor leader of the Grand National Party, the predecessor to the Saenuri, in 2010, Rep. Kim formed a close relationship with him as vice floor leader. He also later worked as Kim Moo-sung’s chief of staff.

On Sept. 21, Kim Hack-yong voluntarily called a press conference to criticize Saenuri lawmakers, including Yoon Sang-hyun, part of the faction within the ruling party loyal to President Park Geun-hye.

His remarks during the conference appeared to reflect the sentiments of the Saenuri’s chairman.

“Chairman Kim is only considering an open primary for next year’s general election, but nothing else,” he said. “The nation wouldn’t forgive us if even just 5 percent of possible Saenuri candidates were strategic nominations.”

Q. The pro-Park faction says that the open primary system is off the table, and Chairman Kim said last weekend that he will consider establishing a separate nomination body if he feels an open primary system won’t be successful. It looks like Kim is actually considering accepting strategic nominations. What do you think?

A. He has always thought that nomination rights must go to the nation, and that intention is still solid. The party shouldn’t opt to carry out strategic nominations, which proved to be somewhat unfair in the past. Even opposition party Chairman Moon Jae-in confirmed that his party will go through with an open primary for the election.

Some have suggested that Moon can’t stick with an open primary since the opposition previously had its own nomination method. Do you think it is possible to stick with the system?

I think he announced the decision because he has a strong determination. I think the chances that the two parties will opt for an open primary is about 60 percent.

Lawmaker Yoon Sang-hyun recently said that Kim Moo-sung wouldn’t be suitable as a presidential candidate since his approval rating is only around 20 percent, whereas the party’s approval rating stands at about 40 percent. What do you think?

We still have two and a half years until the president’s term ends, and it isn’t right for him to publicly say that since he isn’t just a lawmaker but also one of three special advisers to the president for political affairs. If he really wants to publicly say things like that, he should resign from his post as an adviser since that position is supposed to be a bridge between the party and the Blue House. He has clearly instigated disputes within the party; he needs to watch his mouth and behave more carefully.

Once the issue got bigger, Yoon said he only stated his opinion to successfully prepare for the presidential election. What do you think?

Do you think Yoon’s opinion reflects the president’s thoughts?

I doubt that. It must be Yoon’s opinion alone.

Some believe that President Park considers Kim Moo-sung to be a person she can trust. What do you think?

Kim has been trying his best to help President Park so she can run her administration successfully. Everyone knows Kim was the one who revitalized national labor reform.

When the president visited Daegu recently, she was only accompanied by Blue House staff and didn’t ask lawmakers there to join. Doesn’t this reflect her desire to have a strategic nomination process for the general election?

I’ve known the president for a long time and she isn’t the type of person to influence the party like that, and that is why the nation fully supports the president. There might be some people who want that kind of nomination system among the pro-Park faction, but it just isn’t right. Who on earth can oppose an idea promising to give nomination rights to the public?

What if members in the pro-Park faction demand strategic nominations? What would Kim do?

I expect no one to do that. It is insane.

Former floor leader Yoo Seung-min stepped down from the post after he was deviated from the Blue House on several issues. Do you think there’s a chance the open primary will see a similar fate?

It’s a totally different case. The open primary is something the nation wants, and it is the future the country’s politics must pursue.

How about selecting 20 percent of the candidates through a strategic nomination? Isn’t that something the Blue House and the pro-Park faction want?

No matter if it is 10 percent or 5 percent, some unfair cases will be made, and if that really happens, how would the nation view the party? The nation will not forgive us.

What if the Blue House allows Park’s people to run in the primary in core electoral districts?

I’ve seen some stories in local media that speculated that some Blue House staff members had decided run for a district, but such reports are going nowhere. If those people are really willing to serve the nation, they can resign from their posts and attempt to run in the primary.

Some in the pro-Park faction say that those Kim Moo-sung endorses will be selected if the party decides on an open primary.

As one of Kim’s aides, I dare to hope that he has such ideas (laugh). But not at all. Even though I’m known as Kim’s right arm, I would try hard to survive in the district I might be running in to be selected through the primary.

Are you saying Kim Moo-sung will go through with the open primary?

Indeed. Everyone knows that he had a hard time due to the party’s poor nomination system, which in the past allowed each faction to divide up districts.

How will the party elect proportional representatives?

The chairman will not be part of it. By establishing an efficient system, the party will scout political and economic experts.

How is the relationship between the president and Kim?

In the past, the two sometimes had difficulty communicating, but the issue has improved since Lee Byung-ki became the presidential chief of staff. There are rumors that the relationship is bad, but it’s groundless.

The opposition party worries that it will be hard to win 80 seats in the National Assembly in the April 26 election. What about the Saenuri Party?

I think the opposition is being a crybaby. I think it’s almost impossible to win 220 seats, but it might be possible to get 20 to 30 more seats than the opposition party if we successfully reform our primary system.

As Kim’s chief of staff, have you ever delivered public critiques targeting him?

Kim used to wear old-fashioned dress shirts that had a long collar, and the people around me said that style made him look even more conservative and old. I suggested that he not wear those shirts and he accepted the suggestion. I also advised him not to scold party members in public, though my intentions were good since it could make him look bad. I suggested to him that I would take on such roles and he accepted that suggestion as well.