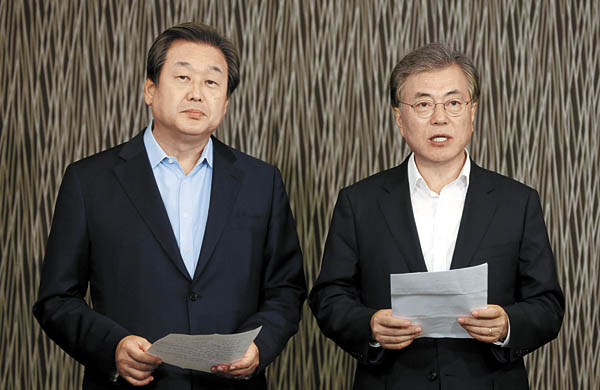 The ruling and main opposition party leaders narrowed their differences over how to hold primaries for the general election next year, making it more likely that they will hold the same kind of primary for the first time.

Kim Moo-sung, chairman of the ruling Saenuri Party, and Moon Jae-in, chairman of the main opposition New Politics Alliance for Democracy (NPAD), met at the Lotte Hotel in Busan on Monday for nearly two hours and agreed to revise the election law at the Special Committee on Political Reform to include primaries open to the public.

The primaries will be in the form of telephone polling of the general public.

“We decided that the central election committee will run the open primary, and we are coming up with measures to prevent adverse effects in case the open primary is adopted by only some parties,” Moon said after the meeting.

“We are also giving additional advantages to political rookies, women, the young and the disabled, and we agreed to prepare regulations for anyone who protests the results of an open primary,” Moon added.

The two party leaders said they agreed to extend the period for preliminary registration of candidates to six months before the election from the current four months, so that potential candidates who are not well-known will have more time to publicize themselves.

One major point of agreement was that the primaries will include telephone polling of the general public using so-called “secured numbers.” Basically a security arrangement, mobile carriers convert actual phone numbers of customers into virtual numbers and provide them to political parties for polling. This is supposed to prevent the party from using phone numbers of known supporters.

It is also much cheaper than the U.S.-style primary, in which party members have to cast ballots in polling places.

But the two leaders could not fully agree on changes to political constituencies demanded by the National Assembly’s Special Committee on Political Reform and any change to the proportional representation system.

“For the constituency issue,” Moon said, “I think we should relate it to the number of proportional representatives as well.”

They said they will keep negotiations going to finally reach an agreement.

The two leaders still have to deal with resistance from their own party members.

Chairman Kim on Tuesday convened a meeting of the Supreme Council of the Saenuri Party at its party headquarters in Yeouido, western Seoul, to explain the open primary system, but some members of the pro-Park Geun-hye faction did not show.

The pro-Park faction is saying the NPAD can nominate up to 20 percent of general election candidates without primaries according to party rules, while the Saenuri Party’s rules do not allow it.

The faction also says open primaries run the risk of NPAD supporters trying to sabotage the Saenuri Party’s chances if they are called in the telephone polling. They may vote for the weakest candidate on purpose.

The pro-Park faction wants the ruling party to nominate some candidates without primaries.