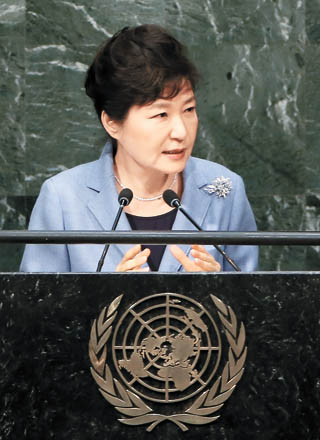 In an address to the United Nations General Assembly in New York, President Park Geun-hye urged Pyongyang to choose reform over attacks and other provocations, and touted her vision for unification of the Korean Peninsula.

“[North Korea] would do well to choose reform and opening, rather than additional provocations, and to endeavor to free its people from hardship,” said Park at the 70th Session of the UN General Assembly on Monday during a four-day trip to the United States.

Her remarks come as North Korea has threatened to conduct a fourth nuclear test or fire a long-range missile, possibly to coincide with the 70th anniversary of the foundation of its ruling Workers’ Party on Oct. 10.

Both of those acts would violate UN Security Council resolutions, and Park said, “This will not only do harm to the hard-won mood for inter-Korean dialogue, but also undermine the efforts of the members of the six-party talks to reopen denuclearization talks.”

She was referring to a senior-level inter-Korean dialogue in August that defused recent military tensions and led to an agreement to resume reunions of families separated during the 1950-53 Korean War, as well as denuclearization talks among the two Koreas, China, Japan, Russia and the United States that have been stalled since 2009.

Park underscored that resolving the North Korean nuclear issue should be accorded the highest priority to “uphold the integrity of the international nuclear non-proliferation regime.” The South Korean president noted the Iranian nuclear deal in July and added, “Now the international community should focus its efforts on resolving the North Korean nuclear issue - the last remaining non-proliferation challenge.”

In a speech heavily focused on Pyongyang issues, Park recognized that this year marks the 70th anniversary of the founding of the United Nations as well as the liberation of Korea from Japanese colonial rule - and the division of the Korean Peninsula.

Park spoke of a unified Korea connected by a railway, pointing out that Saturday also marks the 25th anniversary of Germany’s reunification.

“Just as the UN blessed the birth of the Republic of Korea in 1948, I dream for the day to come soon when the entire world celebrates a unified Korea,” Park said.

She noted that the separation of the Koreas is the “last remaining vestige of the Cold War” and that “a peacefully unified Korea will be a thriving democratic nation free of nuclear weapons and will uphold human rights.”

The president also addressed disagreement over historical issues with Japan in her address, as she pointed out this year marks the 15th anniversary of the adoption of Security Council Resolution 1325 on women, peace and security. She said more attention was needed on the issue of sexual violence against women in conflict situations - a topic she also addressed last year at the UN.

“The most compelling reason is the fact that only a few of the victims of brutal sexual violence during World War II are still alive today,” she continued, referring to the euphemistically called comfort women who were forced into sexual slavery by the Japanese military during its colonial rule over Korea.

“Solutions that can bring healing to their hearts need to be devised quickly while these victims are still alive,” Park said in a more succinct message than in her UN speech last September. “There is no path to unlocking the future if the past is not acknowledged,” she said without specifically referring to Japan by name.

However, she did refer specifically to Japan as she spoke of an Asia paradox, “where political and security cooperation lags behind the high degree of economic interdependence among the countries in the region.”

She pointed to defense and security legislation that was passed by the Japanese Diet earlier in the month, which enables Tokyo to exercise the so-called right of collective self-defense for the first time since the end of World War II. These laws “should be implemented transparently and in a way that is conducive to friendly relations among regional countries,” she said.

Park described Seoul’s efforts to lay the groundwork for peace and security in Northeast Asia, its contribution to humanitarian and peacekeeping efforts globally, and active participation to combat climate change.

Park especially highlighted the Saemaul (New Community) Movement, an initiative first launched in 1970 by her father, the late President Park Chung Hee, to modernize the rural economy of Korea, a key issue during her trip.

This movement, she said, can “develop into a new paradigm for rural development in developing countries” and “lays the groundwork for self-help in communities with the engagement of the local people.”

On Saturday, Korea co-hosted with the United Nations Development Programme (UNDP) and the Organization for Economic Co-operation and Development (OECD) a special high-level side event on the Saemaul Movement, agreeing to help eradicate poverty and build transformative local communities in developing countries.

“In a situation where provocation and inter-Korean dialogue is interlinked, a message that we should improve relations was sent to North Korea,” Kim Keun-sik, professor of North Korean studies at Kyungnam University told the JoongAng Ilbo Tuesday. “But at the same time, mentioning that the UN Security Council resolutions need to be abided by, something also referred to during the U.S.-China leaders’ summit, provided an effective warning message without getting too far ahead of ourselves.”

The UN General Assembly also was an opportunity for Park, Xi and Japanese Prime Minister Shinzo Abe to gather together in the same venue, though the three Asian leaders have yet to hold a trilateral leaders’ summit.

This included their participation in the Leader’s Summit on Peacekeeping convened by U.S. President Barack Obama on Monday, where more than 50 countries pledged some 40,000 peacekeepers for possible deployment on United Nations missions.

The Japanese prime minister said he looked forward to a trilateral leaders’ summit also with Xi in Seoul and also congratulated Park on her successful bilateral summit with Xi earlier in September. Abe also said he hoped Park had a successful summit with Obama in October. Park thanked him.

A yearly trilateral leaders’ summit between Korea, China and Japan has been halted since 2012 because of diplomatic tensions over historical and territorial issues.

Park and Abe, who have yet to hold an official bilateral summit since either took office, last held a conversation at the funeral of Singapore’s founding Prime Minister Lee Kuan Yew in March.

They held their first official meeting in a trilateral summit facilitated by President Obama in the sidelines of the Nuclear Security Summit in The Hague in March 2014.

Korean Foreign Minister Yun Byung-se will meet with his Japanese counterpart, Fumio Kishida, and U.S. Secretary of State John Kerry in a three-way meeting on the sidelines of the U.N. General Assembly on Tuesday. North Korea is again expected to be a key issue.

In a dinner on her first day of arrival, Park conveyed to Ban that she looks forward to North Korea abandoning “its obsession over its nuclear weapons and passive attitude toward dialogue.”

Ban replied that there is a need for North Korea to cease provocations and “head toward a path of dialogue with the international community.” The two discussed the Aug. 25 agreement between the two Koreas following the landmine explosion at the inter-Korean border, which maimed two South Korean soldiers.

The two also met earlier this month in Beijing to attend China’s celebration to mark the end of World War II on Sept. 3.

She promoted Korean culture through a visit to the Korean Cultural Service in New York on Monday, seeing a hanbok exhibition with Miss USA 2014 Nia Sanchez, who holds a fourth degree black belt in taekwondo.

The 25-year-old beauty queen from Nevada is a goodwill ambassador to the World Taekwondo Federation.

It was the first time a Korean president visited the cultural center since 1974, and Park encouraged Korean Cultural Service centers around the world “to spread the appeal of the 5,000-year-old Korean culture and participate in cultural diplomacy to introduce the Korean national brand.”