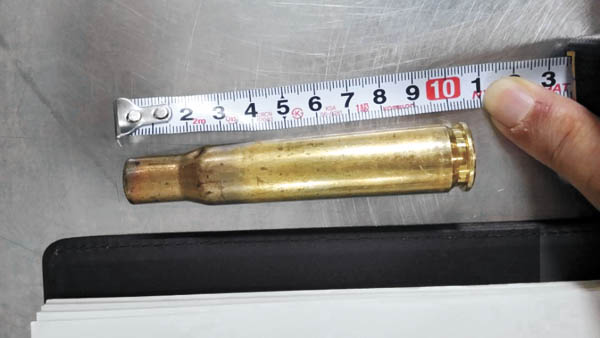 A 10-centimeter(4 inch)-long empty cartridge of a machine gun was found on a Swedish national departing from Korea. Provided by Gangnam Police

A Swedish national departing from Korea was found to be carrying a 10-centimeter (4-inch) empty cartridge of a powerful machine gun in his bag, which was not detected when he carried it into Korea from the United States.

According to the City Airport, Logis & Travel (CALT) and Gangnam Police Precinct, the empty cartridge was found when the suitcase of a 34-year-old Korean-Swedish man, who was only identified by his initial R, was x-rayed on Sept. 18.

The Swedish was going through the departure procedure at the City Airport, Logis & Travel in Gangnam, where passengers can go through check-in procedures.

CALT reported it to the police and the empty cartridge was found to be from a bullet for a M2 Machine Gun, which is also called Caliber 50. The diameter of the cartridge is 0.5 inch and it’s designed to destroy armored vehicles or aircraft.

“The bullet can be used not only on heavy machine guns but also for modified rifles,” a police officer said.

According to the police, the visitor, an IT engineer, travelled around the U.S. and entered Korea on Sept. 4. He stayed in Korea for two weeks to meet a friend.

The police said the shell was a souvenir from a firing range in Las Vegas. It was handed over to the Army after the investigation.

The case provoked criticism of lax security measures at the Incheon International Airport, which the Swede flew into.

Although the shell was from a used bullet, it is still illegal to carry on an airplane or to bring into Korea. The empty cartridge was two to three times larger than typical pistol shells.

Since he managed to bring it in, he could have also brought in a live bullet without being detected.

“We thoroughly look for materials that can pose threats during flights when passengers are leaving, we can’t really detect those materials without prior notice on arriving passengers,” said an official of Incheon International Airport. “And it’s customs that is in charge of screening people that bring prohibited substances such as drugs.”

An customs official at the international airport said, “We did not know that there was a foreigner who was carrying an empty cartridge.”

“I don’t understand how they could not detect something that is about 10 centimeters long,” said an official of the CALT. “It is correct that screening should be stricter for somebody getting on a plane, but that doesn’t mean we should blame the country that he departed from.”