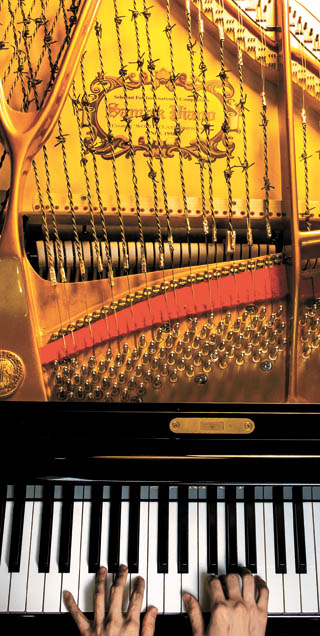 The unification piano, formerly displayed at the Seoul Museum of Art in Jung District, central Seoul, is supposed to illustrate inter-Korea relations through strings made of barbed wire. [JoongAng Photo]

A month has passed since Angelina Salwa R.A Hodali first arrived in Korea, whose pop music the 18-year-old Palestinian discovered and came to love years ago.

It was through a friend that she initially came into contact with K-pop, and eventually she decided to pursue her remaining studies here.

But despite the thousands of miles that stretch between South Korea and her homeland, Hodali, who attends Hankuk University of Foreign Studies in Dongdaemun District, eastern Seoul, says she still feels the sorrow and pain from the tension that lingers with Israel.

Music is how she comforts that anxiety. 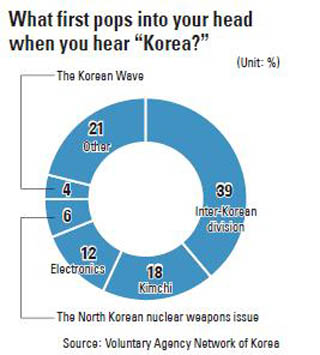 “I wrote a song about the conflicts between Israel and Palestine,” Hodali said. “We use the same Arabic, but the two places are completely different from each other in terms of our everyday lives.”

Lyrics to “A Cry From Deep” illustrates how she “lives in a prison compressed by fear,” and how only “pain and deception exist.”

Noting that her new home holds a similar sense of anguish, Hodali, whose dream is to establish an entertainment agency in Palestine, contended that her song holds a message that must be heard here.

“I wish the same for South and North Korea, as with Israel and Palestine: reconciliation.”

A recent survey conducted by the Voluntary Agency Network of Korea (VANK) showed that a number of international citizens think of South Korea in terms of the peninsula’s division, with 39 percent of some 6,000 people from 12 countries saying that it is the first thought that pops into their minds when they hear “Korea.”

That answer was followed by kimchi (18 percent), electronics (12 percent), the North Korean nuclear weapons issue (6 percent) and Hallyu, or the Korean Wave (4 percent).

In celebration of the 50th anniversary of the foundation of the JoongAng Ilbo, an affiliate of the Korea JoongAng Daily, a special reporting team set out to interview foreign ambassadors in Korea and opinion leaders abroad, in an effort to hear various opinions on inter-Korea reunification.

While most were optimistic that a reunited peninsula would lift up both nations in the international arena, some were skeptical about the possibility altogether.

“A peaceful procedure for unification is a launch pad on its own for South Korea to become a ‘charming country,’” Emanuel Pastreich, an associate professor at the College of International Studies in Kyung Hee University, said in fluent Korean.

Indian Ambassador to Korea Vikram Doraiswami added that a unified Korea would have to adopt bigger roles on the global stage, from taking the lead on nuclear nonproliferation efforts and advancing medicine, to accelerating overall progress in Africa.

“Korea could model after Germany, which took its own unification as an opportunity to pioneer in the development of green energy resources and strengthen its foothold in the world economy,” suggested Amy McLennan, a teaching and research fellow in medical anthropology at the University of Oxford.

Ram A. Cnaan, a professor, associate dean for research, and the chair of the doctoral program in social welfare at the University of Pennsylvania, commented that a “successful unification lies in the ability for North Koreans to adjust to the new society, and for various resources to be evenly spread in their communities.”

However, Stephan Haggard, a professor at the School of Global Policy and Strategy at the University of California, San Diego, was skeptical that the two countries would reunite any time soon.

“For now, both countries should worry less about inter-Korea relations, and focus more on their key roles in multilateralism,” he said.