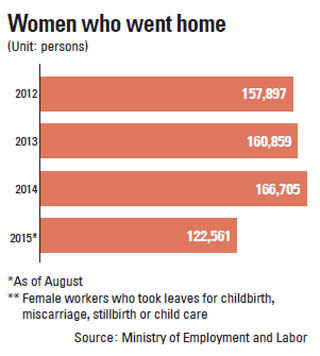 Employers in Korea that lay off women workers because they are pregnant or refuse to give them maternity leave will now face penalties, as the government tries to implement a system that automatically detects when a woman is not offered maternity leave.

According to the Ministry of Employment and Labor on Wednesday, a bill to revise the Gender Equality in Employment Act has passed the Cabinet. It was submitted to the National Assembly later Wednesday afternoon.

Once the revised law is passed by the National Assembly, the public health insurance system will start sharing information on female employees’ pregnancy and childbirth information with the Labor Ministry. The ministry will start an investigation if an employer of a pregnant worker doesn’t report a paid maternity leave.

Until now, the government was only able to crack down on employers that violated the act when the employees themselves complained that they were forced out of a company for becoming pregnant or were denied maternity leave. Some women in that situation didn’t know they could complain, and others feared retribution from the employer.

“With the revision, the government hopes to protect pregnant workers’ rights by making employers live up to their legal obligations,” said Na Young-don, director general of the youth and women’s employment policy division at the ministry.

Normally, if a pregnant worker goes on maternity leave or a mother of a child younger than eight goes on childcare leave, employers report the leave to the government to receive
subsidies.

Under the new system, the government should be informed automatically if a pregnant worker loses her job or doesn’t receive maternity leave.

Those cases will be subject to a labor authority investigation. The system will also detect unreported paid leave for women who have miscarriages or stillborn births.

A company that fires a woman worker during a pregnancy or within three months of giving birth is subject to a fine of up to 30 million won ($25,400), and its CEO can be jailed for up to five years, according to the Labor Standards Act. If the company fails to provide paid maternity leave, the CEO can be jailed for up to two years, and the company can be fined up to 10 million won.

It appears that almost 10 percent of working mothers fail to be protected by the labor law.

According to the ministry, some 105,633 female workers, not including civil servants and teachers, gave birth last year, but only 88,266 went on a paid maternity leave. The remaining 17,000 mothers were laid off or went on unpaid leave because of their
pregnancy.

Under the law, female employees are eligible to receive monthly pay of up to 1.35 million won for three months after giving birth, and the Labor Ministry covers the cost of the first two months for smaller companies and the first month for conglomerates. The ministry also provides a subsidy to employers ranging from 300,000 won to 600,000 won per person on leave to get them to send mothers on childcare leave.