‘Hidden Singer’ gets ‘back to basics’

‘Hidden Singer’ gets ‘back to basics’ 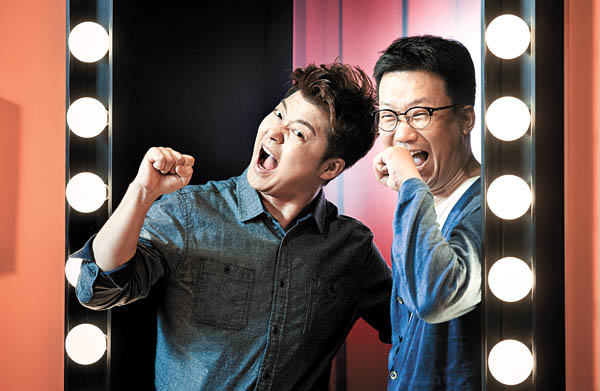 MC Jun Hyun-moo, left, and chief producer Jo Seung-wuk of “Hidden Singer” pose for a photo ahead of the program’s new season, which begins this Saturday. [JoongAng Ilbo]

“Hidden Singer” - an entertainment show on JTBC where singers and their impersonators compete behind screens to see who can pass as real - is coming back with a whole new season.

But most of all, “Hidden Singer” is hailed for allowing people to really listen to the music, instead of being wowed - but also distracted - by colorful choreography, outfits and other stage effects used by today’s K-pop stars.

For these reasons, JTBC was able to sell the format of “Hidden Singer” to broadcasters in the United States and China.

Season four of “Hidden Singer” begins on Saturday, and chief producer Jo Seung-wuk told Ilgan Sports, an affiliate of the Korea JoongAng Daily, that despite prevalent concerns that the newest season may not be as strong as previous ones, “many singers and many impersonators actively took part in the recordings,” adding that “viewers will be surprised that there are still so many stories.”

He added that every episode will have a different singer and different impersonators, and their stories will define what the specific episode aims to evoke - tears or laughter, and sometimes both.

As for what will differentiate season four from the previous seasons, Jo said the production crew has chosen “going back to the basics” as the main philosophy of the latest season. “‘Hidden Singer’ is where a singer becomes a real singer,” he said referring to what he means by “basics.”

Established star singers will sing with their fans the songs that made them who they are today, and reflect on their careers and lives and define their next chapter. Jo added that “we kept true to the original intention of the show, yet are dedicated to each episode as if it were our last.”

The first episode of season four, which airs at 11 p.m. on Saturday, will feature singer BoA, who is celebrating 15 years since her debut.

Ahead of this, to drum up fans’ expectations, “Hidden Singer” held a “Doppel-
singer Concert” on Sept. 4 - which aired on JTBC from Sept. 26 to 27 as the Chuseok (harvest festival) holiday special. In the concert, eight singers - including Wheesung, Hwanhee and Lee Seung-hwan - each performed with their impersonators.