After storied past, Posco looks to a challenging future

After storied past, Posco looks to a challenging future

At first glance, the 30-story blast furnace with rust stains and a scorched black chimney in Gwangyang, South Jeolla, looks like an abandoned industrial complex. But a closer look discerns steam coming from the chimney - steam that never stops in the hottest and most active workplace in Korea.

Inside the complex, robust men work molten metal near a furnace without exchanging a word. The furnace is the heart of a steel mill. It mixes molten iron ore, coke and limestone to produce a liquid metal - steel. Visitors have to adjust to the din of restless machinery and the heat radiating from 1,510-degree Celsius (2750-degree Fahrenheit) liquid metal. Thirty-six employees in heatproof clothes that look like spacesuits are constantly on duty in three shifts, every day, with no exceptions. Blast furnaces at steel mills don’t take holidays.

“The world’s largest furnace produces 15,000 tons of molten metal daily,” said master craftsman Chang Sun-chan, who joined the company in 1987. “We didn’t get to take a day off even for the 70th Liberation Day.
I have my pride working here, where Korea’s industrial economy was
revitalized.”

Posco’s Gwangyang plant was completed in 1992, and its specialty is producing high-value products such as automotive steel sheets. Its furnace has produced 8.3 million tons of such products in 2014 for the top 10 automakers in the world, including Toyota, GM, Renault and Nissan, Hyundai Motor and Kia Motors.

Because of the excellence of its steel, automakers highly value the Posco plant, describing it as an “excellent supplier” or “the company’s future strategy partner.”

Once the steel is made, veterans of the steel mill examine every steel product to make sure there are no defects. Such tasks, which detect small defects, cannot be done by either ordinary workers or machine.

“Chinese steelmakers have caught up with our products, but our master craftsmen’s skills are inimitable,” said Jin Gwang-geun, a technology researcher at Posco. “Such high-class skills, which can only be achieved through decades of working experience, are what’s needed to create high-quality products.”

The steel industry is the major factor central to Korea’s economic growth.

Park Tae-Joon, founder of Pohang Iron & Steel, started building the company’s first plant in Pohang, North Gyeongsang, in 1970. He was joined by 3,154,884 people determined to do their bit for Korea’s economic growth.

Young workers who came from distant provinces had to struggle with heavy winds and sandblasts from
Yeongil Bay.

“It looked like a field operation by a group of soldiers,” recalled Hang Sang-bok, chairman of Samil Group. “People from Pohang used to call us the Yellow Army. Working conditions were just awful. People used to sleep on desks with blankets, and they could hardly breathe in sandstorms while working. During mealtime at the wild plain area, we had to pour water into our packed lunch to filter out sand.”

President Park Chung Hee supported the nation’s first steel mill with all his power. The president directly engaged in the construction plan by meeting with U.S. President Lyndon Johnson. Park did not hesitate to ask him for financial and technical support in 1965. Park also had no scruples about exerting political influence to protect Park Tae-joon and his company from all interference.

Employees of Posco referred to the first steel mill as the “people’s plant,” and Korea took the global lead in the steel market. Posco has sustained its 100-year strategy with massive investments in the research and development (R&D) of steel.

Steel is the essential backbone of major industries such as automobiles and construction. And Posco kept on surprising the world with its world-first technologies.

One of its sources of pride is “FINEX technology.” This new iron making process eliminates unnecessary steps and allows the direct use of cheap iron ore and non-coking coal as feedstock. Such technology allows the company to reduce overall operating costs, leading to a 15 percent reduction in production costs. But R&D continues to find better technologies. 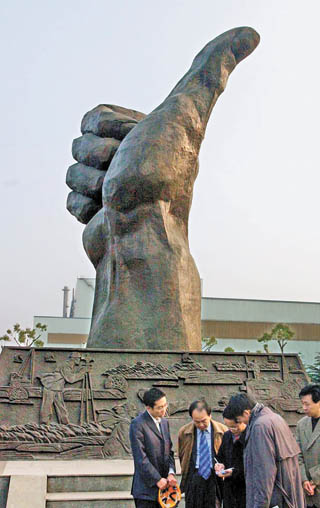 A large sculpture of a raised thumb sits in front of the headquarters of China’s No. 1 steel manufacturer, Baoshan Iron & Steel, in Shanghai, China. It represents its ambition to become the world’s biggest steel manufacturer. [JoongAng Ilbo]

“Our company’s 47 years of expertise in steelmaking is loved by many foreign companies,” Kwon said. “Of course, it was bumpy at the start, but our restless pursuit of new technologies helped us withstand those rough times.”

With Posco in the lead, there are 30 major steel manufacturers in Korea, including Hyundai Steel, Dongkuk Steel and SeAH Besteel. Hyundai Motor’s holding company, Hyundai Steel, which ranks second in Korea’s steel industry, specializes in weight reduction of cars, and SeAH Besteel focuses on research and development of special metals.

China’s ramped up production and large number of steel companies are blocking Korean steelmakers from growing. Chinese steelmakers’ share of the international market is currently around 47 percent, while the Koreans only control about 4 percent since 2010.

In fact, Chinese steel imports to Korea have been increasing since 2010. At present, about 23 percent of Korea’s steel supplies come from China.

“Korean steel companies missed the golden time to grow after the 1997 foreign exchange crisis,” said Joo Won, head of industry research at the Hyundai Research Institute. “They need to focus on producing high-quality products such as magnesium and manganese steel, which will be a great growth engine for them.”

Cooperation with domestic and foreign customers is highly recommended to produce differentiated products. The old style of marketing was looking for customers who needed steel, but a different approach
is now required: selection and
production of specific kinds of steel on behalf of companies in need of such products.

From the initial step of developing new products, steel manufacturers need to discuss with companies the metal they want, investment plans in research and development and marketing strategies.

“Steel companies need to quickly adjust to this new era’s demand, where innovative products such as electric vehicles and hydrogen-powered cars are being produced,” said Kim Joo-han, a senior researcher at the Korea Economic Research Institute.

Focusing on profitability by lowering prices of supplies is another way to overcome overseas threats. According to McKinsey and Company, the worldwide steel industry has a common trait: price reductions. Reducing the price of raw materials by 1 to 2 percent leads to much more cost reduction in the processing price, which could be a successful tactic to capturing more market share.

Steel companies in Korea need to consider reforming their industrial structures. The world’s largest steel companies such as ArcelorMittal and Newcore are famous for their smart-sourcing, a business strategy to discard non-core industries so that they can boost production by 10 to 20 percent.

“Steel companies are hesitant to take risks developing new metals such as chrome steel and nickel steel, the materials frequently used by construction companies, especially for building factories,” said Min Dong-jun, a professor at Yonsei University. “The government must encourage its steel companies to take the risk in order to survive in the global market by producing high-quality metals and inventing new technologies.”