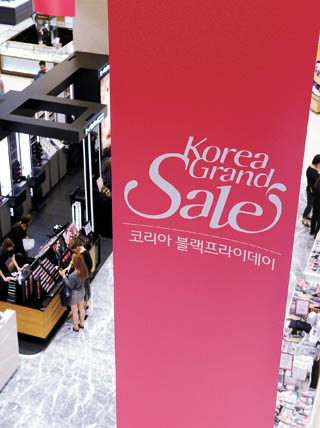 A huge banner hangs from a ceiling at Shinsegae Department Store’s main branch in central Seoul on Wednesday. Starting today, 71 department store branches of Shinsegae, Lotte and Hyundai among others, 398 major discount stores such as E-Mart and Lotte Mart and over 25,000 convenience stores will be participating in one of the biggest retail discount events, which is dubbed Korea Black Friday. Some 27,000 online shopping malls are taking part, too. [NEWSIS]

A total of 27,000 different shops - including department stores, big discount supermarkets, convenience stores and online malls - will offer up to 80 percent off through Oct. 14.

Lotte Department Store, the country’s top chain, will slash prices on some 580 brands.

Rival Shinsegae Department Store is focused on outdoor brands such as K2, Black Yak, North Face and Kolon Sport. Items from those brands will be marked down as much as 80 percent.

Discount chain E-Mart will select 1,000 popular household items and sell them at half the original price.

Lotte Mart is aiming to sell groceries such as eggs at half-price.

No. 1 convenience store chain CU will pump up the points earned in its loyalty program, while GS 25 will give two products for the price of one for 700 popular items.

Rival 7-Eleven is poised to offer up to 30 percent off on 30 items.

Movie theater chain CGV is set to take 2,000 won ($1.69) off the price of movie tickets, though moviegoers are not allowed to use other coupons along with the discount.

The sales event is the latest in a string of government efforts to boost consumption and the local economy.

The government designated special sales promotion weeks from Sept. 14 through Oct. 14 to invite retailers, including department stores, discount chains and fishing and agricultural producers, to join the sales events.

The shopping promotion weeks will unfold in two phases before and after the Chuseok holiday that fell on Sept. 27.

While the products marked down during the pre-holiday event consisted of groceries and food items that attract high demand because of the Chuseok holiday, the post-holiday phase running from Oct. 1 to 14 will sell a
broader range of items from clothes to cosmetics.

In the earlier promotion from Sept. 14 to 25, over 2,000 farming and fishing cooperatives and open-air traditional markets offered agricultural produce at discounted prices.

Also on the list of participants are restaurant chains, including VIPS and BBQ.